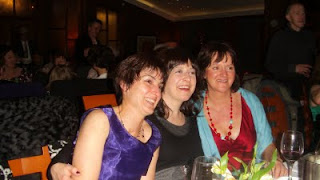 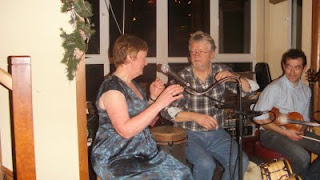 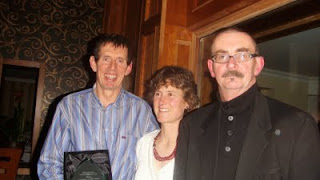 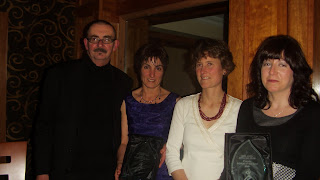 The end of the year is almost upon us and with it goes the passing of another decade. It’s been a year and a decade of remarkable progress for Midleton AC with our club now boasting a record number of members.
On Friday evening last Garryvoe Hotel was the venue for the club’s annual Christmas Dinner and it was time to hand out the accolades for the outstanding performers of 2009 and present the club’s inaugural ‘Athlete Of The Decade’ award. Although for one reason or another the attendance was down on the previous year, the social highlight of the year was again an outstanding success with the ultimate award winners proving very popular choices.

Danny McCarthy – Athlete Of The Decade

Danny McCarthy richly deserved his award as the club’s outstanding athlete of the past ten years. No club runner has covered as many miles or participated in as many races as Danny since the dawn of the new millennium. In winter and summer, over long and short distances, near and far, Danny has been on the start line. He has displayed a hugely consistent line of form recording many personal best times sin the process and also amassing a huge array of prizes. Danny is equally at home on the 3K circuit or on the 26.2 mile marathon journey in Dublin. He has also been a remarkable guiding light for other athletes and on several occasions has even sacrificed his own race for the benefit of others.

Danny’s renowned leadership has been hugely instrumental in building Midleton AC into one of biggest clubs in the county. In training and on race day his advice and encouragement have been central to the positive performances of many of our club colleagues, particularly newcomers.

Throughout the corridors of time, Danny on many occasions could have been named as ‘Club Athlete The Year’ but this latest accolade even more graphically illustrates his massive contribution to the sport and the club he loves. – Congratulations Danny!

Good friends and training partners Breda Cahill and Anne Marie Perry proved to be inseparable when it came to selecting the outstanding female performer of 2009. Both had superb seasons over the shorter distances, producing some excellent displays epitomised by their high finishing positions overall in the Ballycotton Summer Series. However it was in the autumn of the year, that the popular duo really sprang to prominence with their power packed displays in the Dublin Marathon.

The individual and team prizes collected locally during the months before hand faded some what into the back ground when national honours arrived in the shape of Marathon Championship medals. Forming two thirds of the Midleton AC O/35 team, the popular Cloyne ladies came home promptly home after colleague Michelle Nolan to clinch a silver medal for the club at national level. The displays were a fitting reward for many months of months of disciplined training in the company of Anne Marie’s mother Margaret which resulted in all three athletes earning national medals,

Breda and Anne Marie can look back at 2009 with many great memories and can place their ‘Athlete of The Year’ awards side by side with the many other prizes collected during a glorious twelve months of success.

It’s fair to say that the bookmakers had probably suspended betting on this category ever before Neilus Aherne stepped on the start line for the 30th Dublin Marathon in late October. The Ladysbridge man had a season of non stop success, rarely returning empty handed from any event he entered and in the process setting higher targets with passing of each month.

Back in early season action after persistent injury problems, Neilus was gathering momentum as the ‘10’ Mile Series was ageing in Spring. By the time summer dawned the seconds and minutes were already being knocked off and Neilus sprung into the limelight with some great running in the Ballycotton Summer Series. He continued the upward spiral with an outstanding display in the Cork Half Marathon and then followed up with another super run in the Cork To Cobh Race.

In Dublin a 3 hrs 2 minutes time rolled back the years and sealed the club’s top annual male accolade for the popular Ladysbridge man, despite considerable opposition from many other top club performers.

A large Midleton contingent were on the start line on Sunday last as the curtain came down on the 2009 Cork BHAA calendar with the staging of the annual Cork Simon Christmas Run. A perfect morning for running belied the date calendar date, but a few seasonal costumes nevertheless indicated the arrival of the man from the North Pole was imminent.

Congrats to both Brian Healy and Ned Ramsell who completed the full compliment of Cork BHAA races for 2009 season. It was Brian’s second year in succession to reach that milestone whilst it was Ned’s 4th year in a row with a full card at the end of the year – quite an achievement.

Meantime another one of our regular participants Mary Toher was recently in action in another seasonal event in England. Mary completed the 10 mile course in the appropriately titled Multi-Terrain Mince Pie Race organised by Seaford Striders.

A packed line up of races is in store over next few weeks, with plenty of action near and far over a variety of distances.
It’s off to Shanagarry on Saturday next - 12.30pm for the annual Christmas 5K. (Note the earlier starting time) Numbers were scarce years back in this event but with the running boom locally we can expect another good turn out for this Ballycotton Running Promotions organised race this year.

On Sunday next, there will be plenty of incentive to journey to the north west of the county as Duhallow AC host the Newmarket to Kanturk ‘5’ Mile Race. This event boasts an impressive prize list with 1st, 2nd and 3rd prizes in all categories, top 10 men and women individuals and 3 club team prizes. Race time here is at 2pm with the start line located at Newmarket Co-Op. All finishers will receive a prize. - More information from Donie Shine of Duhallow AC – 086-8149970.

It’s back to the East Cork 3K on Tuesday 22nd as we reach Race 4 in the ever popular Series. Our athletes have been very much to the fore in the events so far, with several impressive performers and several of our newcomers also getting their first taste of competitive action. Donal Broderick in 10:56 led our large crew home in Race 3 whilst Sean O’Sullivan, Tom Cody, Conor McGrath, Billy O’Sullivan, John O’Connell and Ned Ramsell were amongst other club members to catch the eye. There was also another excellent run by Caroline Geary to maintain her fine form in the event.

Run a mile for the Goal Charity has been part of the Christmas Day ritual for many athletes in recent years. The opportunity is there again locally this year on Christmas morning at Cork IT (10am), Youghal AC (11am) or Ballynoe (11am).

Belgooly has also become a central part of the runner’s yuletide diary over the past few years. Entries have swelled particularly over the last 2 years with runners anxious to return to action after the previous day’s festivities. This year’s Dick Copithorne Memorial ‘4’ Mile Belgoly Race begins at 12 noon, but the advise is to arrive well in advance of this time. - More details on this event from 086-841119 or www.belgoolyac.blogspot.com. Dungarvan GAA Club have also a Fun Run at 11am on the same day if you wish to travel east rather than west.

This year’s Bandon AC seasonal fixture is pencilled in for the following Monday December 28th. The Donough Coughlan Memorial ‘5’ Mile race is renowned as a fast race, which is well organised by Tom Laffan and his team. It’s an 11am start with Tom available on 087-6501649 for further enquiries. You can also log on to www.bandonathleticclub.com

January also brings us the beginning of the Munster ‘10’ Mile Series, with the traditional start in Mallow on Sunday 10th – 12.30pm. Mallow AC are making a big push this year in relation to this opening race in the Spring Classics Series which again is being sponsored by John Buckley Sports. See full details on www.mallowac.ie or call John Holland on 022-21280.
Remember entry to race 2 in Dungarvan is by pre-entry only. Cut off point here for the January 31 fixture is Monday January 18th. A visit to www.westwaterfordathletics or a call to James Veale 086-8184762 will set you on the right footing.

- Just a quick word on the new BHAA fixture list. The action begins as usual on Sunday January 24 with the FMC ‘4’ Mile Race in Little Island – 11am.

Before concluding a reminder of the ways in which you can stay in touch with Midleton AC.
In fact, staying in touch with what is happening in the club is now easier than ever, as our non interactive blog now in operation. Check www.midletonathleticclub.blogspot.com for all regular updates. E mail contact is midletonac@ireland.com You may also have regular club news, updates and results sent directly to you via our club e mail service. Please give your e mail address to PRO John Cashman to avail of this service (almost 100 members now on list). Telephone enquiries regarding the club may be directed to Danny McCarthy on 087-2403940

Greetings
Finally, season greetings are extended to all our members and their families for a Christmas season full of joy and a New Year of health and peace.
(The next news update on Midleton & District News will be on our issue dated January 14th – however our blog updates/e mail contact will continue in the meantime)
Remember to enjoy the festivities but – “keep on running”