Midleton AC Senior Section
by Peter Gunning
It is a sure sign of summer when we run with the cheetahs, pack up the buckets and spades for a trip to Youghal and then line up for the first of the four-race Ballycotton 5 mile series as sights are set on the bank holiday weekend and the Cork City Marathon. Ah yes fellow runners, check the road-racing calendar, summer has most definitely arrived.
Leaving the cheetahs for dust, Kevin Smith finished a terrific eight place in the highly competitive Eagle 4 miler in Fota Wildlife Park with a time of 23.19. Marc Dalton came in 22nd place in 24:07 with Tom Cody and Emmet Ronan comfortably inside the top 40. Tom once again came home with a golden category prize for first over 55. Also on the podium were Donie O’Connell and Danny McCarthy, first and second respectively O-60. There was great running also from John Cashman, Morgan O’Regan, Brian Cott, Fergal O’Meara, Owen O’Connell and Barry Aherne. Michelle Kenny led our ladies home just ahead of Margaret Jones and the resurgent Anna Doris. Cork-marathon bound Sheila Buckley also had a fine run narrowly missing the 28 minute mark. Margaret and Anna took category prizes at the event as did Mary Toher and Cathleen O’Connell.
In Youghal last Sunday the Emer Casey 10k proved a gruelling course for the twenty club members who donned the sun-cream and headed to the sea-side town.  Congratulations to Morgan O’Regan who broke the magic 40 minute barrier in a comfortable 39:49 to lead our team home.  Great running too by our next three male athletes, Seán O’Sullivan, John Cashman and Kevin Cooney. Once again, Michelle Kenny was our first lady with Mary O’Keeffe, Sheila Buckley, Margaret Jones and Denise Hickey making up our first five. Good to see Bernie Twomey back on the road here again to join Marion Cronin, Mary Smith, Joan McCarthy, Sheila Bulman and Ciara Baldwin amongst our finishers.
The main event of the last two weeks however, took place last Thursday in Ballyhandreen as the now synonymous with summer Ballycotton 5 Series kicked off. The huge field led to the predictable  slow start and with the undulating terrain many of the athletes found the course challenging and were unable to maximise the generous descent to the finish line. The beauty of this four-race series however is the variety offered by each of the four courses ranging from hilly to flat and monotonous to scenically breath-taking. Ballyhandreen is notorious as a tough introduction to the series. The much coveted T-shirts for the Top-50 men and Top-20 women will be well-earned. Darragh Canavan 29:04, Kevin Smith 29:26, Marc Dalton 30:09, Denis Kelleher 30:13 and Adam Duchnicz 30:14 are well-placed going into the second race in Shanagarry in June as are Nigel Carroll 30:40, Mike Dolphin 30:43, Kieran Mulcahy 31:10 Tom Cody 31:18 and Emmet Ronan 31:52. After a frustrating season it was wonderful to see the return of Donal Broderick who along with John Cashman, Fergal O’Meara, Francis Maunsell and Alan Kelly will all be battling to improve their overall standings over the next three races.  Our ladies once again seem to set to dominate the leader-board. Michelle Kenny 35:50, Susan Delaney 37:01 and Mary O’Keeffe 37:03 can all run faster. Helen Gilroy 37:33 and Sheila Buckley 37:34 ran conservatively, no doubt mindful  of the challenge of next Monday’s marathon. Kara Reilly, and Catherine Terry are new club members who caught the eye with hugely impressive finishes while Breda Cahill and Marian Aherne are among the more senior members who hope to be sporting T-20 logos come the autumn.
Best of luck to all our athletes who are taking part in next Monday’s Cork City Marathon. There will be a post-marathon post-mortem in the Maple on the night where club member and proprietor, Brian McCarthy will be displaying his blisters after his morning’s 26 mile jog through the city streets.  Brian has informed this column that his Carlsberg works wonders for nipple bleed (probably) while Guinness possesses restorative respiratory qualities (definitely). Whatever is your cure, Brian and Gary will find it for you behind the bar from (or before) 8.30pm.
Training continues on Mondays 6.30 at the CBS and Tuesday from the Community Centre at 7pm. Check the blog for fixtures and updates and remember to contact John if you want  to mention any personal running achievement, particularly a PB or a run in an unusual location. With over 200 members it is not easy to track every member’s itinerary.
Until next time.... keep running!
Posted by Midleton Athletic Club at 23:32 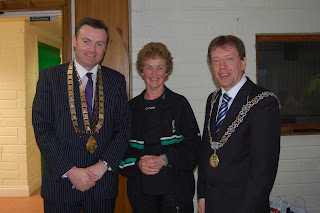 Updates
John Buckley 5Km
We had great representation tonight as usual at the John Buckley 5Km Race.From a field of over 800 runners we had several PBs and again had prizewinners

PS Dont forget there is another 5 Km Race tomorrow Wed Night organised by Leevale AC in aid of the North Mon. Reg at St Vincents Hurling Club from 6Pm  on.
RACE AT 7.30
Posted by Midleton Athletic Club at 00:07

We have organised a post marathon gathering in the Maple Lounge next Monday night from 8pm (before it if you wish.) This is open to all members but most especially Marathon Runners ,Half Marathon Runners and Relay Runners and all the supporters we expect to see along the route on the day.Finger Food will be served.
Danny
Posted by Midleton Athletic Club at 17:30

All that is needed of you if you are going is to book your own flight and inform myself Marc Dalton or Fergal O Meara that you are going so we can book the accommodation.
25 Midleton AC club members did this trip in 2010 and it was a huge success, it has everything from good food to nice bars with all round sunshine. Escape the November Rain and join  the fun in Lanzarote 2012. More info to follow soon on Itinerary of the trip. So Please get Booking….
Posted by Midleton Athletic Club at 09:04

We are hoping to arrange a post marathon get together for all members who take part in the Cork City Marathon on the night of the race. Full,Half,Relay and supporters will all be welcome.Full details shortly.Also for those interested the AGM of the club both Juvenile and Senior will take place in the Two Mile Inn on Monday next at 8pm.
Posted by Midleton Athletic Club at 21:30

There were 95 finishers in the Midleton AC team.

Posted by Midleton Athletic Club at 08:51