Midleton AC Senior Section 30th April 2012
The Midleton 5 Mile Joe Hourigan Memorial takes place this Thursday night at 8pm with registration in the GAA club from 5pm and an 8pm start on Dwyer’s Road. This event has mushroomed over the past few years to become one of the biggest five-milers on the road-racing calendar with over 600 athletes expected to finish. The course is excellent. Virtually traffic-free, relatively flat and with a super sprint-enticing final 600metres, PB chasers may very easily be rewarded.
Once again race director, John Cashman together with club captains Sally, Edmund and the ever-diligent organising committee literally have left no stone unturned (as this column goes to press, our friends in the council are busy pouring tarmac into potholes on the course). The large team of stewards will guarantee the safety of all runners on the night while back at race HQ in the GAA club the catering crew will ensure refuelling before prizes are presented to both the front runners and the randomly selected. Pre-registration will take place in the Community Centre from 6-7pm on Tuesday. We would encourage members to avail of this opportunity to beat the queue and collect your bibs in advance.
Apart from the organising of our annual race it has been a hectic few weeks on the running circuit with members representing the club in a variety of events both long and short, local and international. On 15th April Mary Toher added yet another completed marathon to her bulging CV donning the Midleton AC vest in Brighton. Meanwhile on the same day, Peter Gunning showed signs of a return to more expected form in running a comfortable and even-paced 3:36 in Rotterdam. A week later, Peter’s training partner Seán O’Sullivan ran a superb 3:17 in London. Wonderful running in London too by  Rosari Griffin  whowiped 35 minutes off her recorded time last year. Further afield in Kracow one of our Polish colleagues, Stanislaw Bychecz equalled Seán’s 3:17 wearing his AAI endorsed Midleton AC colours. Stan, we salute both your modesty and your talent. Unfortunately Declan Ó Dorgáin failed to complete the Paris Marathon having sustained a broken foot at the start of the race. No doubt Declan will be back minus the cast very soon to chase a sub 3:20 in Dublin in the autumn. While we congratulate all our above mentioned marathoners, this column’s  laurel wreathe must go to Seán O’Sullivan, not only for the excellence of his run but for his joining that elite band of marathoners who have completed the world’s recognised five majors, Berlin, New York, Chicago, Boston and London.
Following on the theme of star performances, Denis Kelleher’s growing reputation as a Midleton master on the ascent was further enhanced with a third place overall in recent Stride by the Tide in Redbarn. Also successful at the seaside event were Donie O’Connell and Danny McCarthy who took gold and silver respectively in the O-60 category, Christine Murphy, first O-40, Joan Hough first O-50, Eugene McCarthy first O-40. John Cashman had a terrific run also on this demanding surface with  “I was only jogging” Neilus Aherne taking bronze in the O-55.
With the buckets and spades tucked away for another year it was off to Ballynoe last Thursday night for the annual East Cork Road Racing championships. In the ladies’ 2k event Sheila Buckley picked up a well-deserved bronze. Following closely in Sheila’s slipstream, Claire Fitzgerald, Margaret Jones, and Helen Gilroy took gold in the team event with Susan Delaney and Trish Murphy narrowly missing out. In the men’s gruelling  5 miler which included Everest times five, Darragh Canavan won silver in 29.19 with John Hennessy four seconds behind taking bronze. Kevin Smith led the Midleton AC team home to take silver with Marc Dalton, Tom Cody and Denis Kelleher joining him on the second rung of the podium. Well done to all who braved the elements and represented the club on one of the most demanding courses on the road-racing circuit.
On the busy calendar of events over the past two weeks one race stands out both for the participation of our members and for the incomparable local community spirit. Overseen by our own John Cashman, the Ballintotis 4-miler attracted over 700 athletes (110 from our own club) to the picturesque lakeside course. The race itself was an exciting affair witnessing superb running from several of our members. Special mention must go once again to Darragh Canavan and John Hennessy who both subbed 23mins. Kevin Smith, Marc Dalton and Kieran Mulcahy  all came home under 24 min while Mick Dolphin, Neilus Aherne, Morgan O’Regan, Brian Cott and Emmet Ronan all ran close to the six minute average mile mark. Michelle Kenny, Claire Fitzgerald, Sheila Buckley, Helen Gilroy, Kara Reilly and Joan Hough were amongst the too many to mention of our ladies who did us proud. Well done again to John and his team for providing us with a terrific local race and for designing a course which is ideal for marathon preparation.
Training continues on Monday nights 6.30pm in the CBS field and on Tuesday’s at 7pm meeting at the community centre. Until next time ...bígi ag rith ...keep on running!
Also please note -
The Chi running workshop which was to have taken place on June 16 will now
not be taking place until September.  If you are interested in taking part
please contact Sally, tel. 087 2265857 or thedrennans@eircom.net.
Posted by Midleton Athletic Club at 16:25

Entries for The Cheetah Run, organised by Eagle AC and sponsored by John Buckley Sports, and held in Fota Wildlife Park and the grounds of Fota House, will open for on-line entries on Run Ireland tomorrow, May 1st.

Sponsors of The Cheetah Run

There is a limit of 800 entries again this year.


Last year, the event sold out well before race day and, due to huge interest in the event, we’re expecting this year’s race to sell out very quickly.
Don’t be disappointed! Once the 800 limit is passed, that’s it! No more entries.....even for elites!
A regular (daily, at least) update on entry numbers will be posted on the Eagle AC website.
John Quigley
Chairman, Eagle AC


Posted by Midleton Athletic Club at 16:20

*REMINDER  a special entry desk will open before training on
TOMORROW  TUESDAY NEXT MAY 1ST AT
MIDLETON COMMUNITY CENTRE BETWEEN
6PM AND 7PM ONLY TO FACILITATE OUR CLUB MEMBERS.
PLEASE BRING YOUR 10 EURO ENTRY FEE AND YOU WILL RECEIVE YOUR RACE NUMBER.

We STILL require plenty of stewards this year to oversee the big race – do you know somebody who can help.
Text Edmond O’Sullivan the details on 086-8323267. Edmond’s blue bus will be parked inside main gates of GAA club from 5pm onwards for early arrivals and will be the assembly point for all stewards and helpers. We do not expect a need for a large number of stewards until after 6.30pm. However a few early arrivals would be greatly appreciated.

We ask all club members to please bring at least one sliced pan of sandwiches to help cater for the expected large entry. More details on food from Margaret Twohig 087-2094493.

Away from the race, a reminder that the CIT track is being hired by our club from 7.30am to 8.30am each Saturday morning for the next few weeks. Please call Marc Dalton for more information   0872388326

Finally, Kevin Smith is one of our members who doing fantastic work with the juvenile section of our club. Kevin has volunteered to doing stewarding duty on DAY 2 of the County Juvenile Championships at CIT on Sunday week May 13th.  However, we do need a volunteer for Day 1 on Sunday next – would somebody be able to assist in this matter?  Please call Kevin for more details on 087 9716372.

We will have an entry desk set up at the Community Center between 6-7 so we can take entries from as many club members as possible .It is not confined to club members so please pass the word around to anyone you know who might be interested.We are doing this to try and avoid long queues on Thur night next so please enter Tue evening or get someone to do it for you.
Thanks Danny
Posted by Midleton Athletic Club at 16:30

CIT Track
Just to confirm the CIT Track will be available on Saturday Morning for 7.30 -8.30 for the next Three Weeks Further details will follow  Any queries please contact Marc Dalton at 0872388326
And whilst I am online let me extent a very special thank you to our youngest supporter last night at the East Cork Road Racing Championships young Ryan Dalton (4 months) who supported both his Mam and Dad in the Ladies and Mens Races. I think Marc and Colette have the right idea start them young.
Danny

Posted by Midleton Athletic Club at 16:02 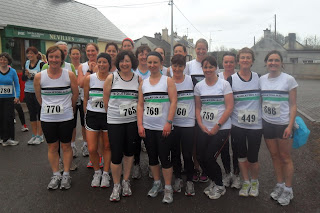 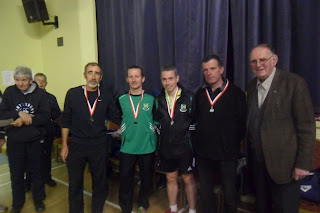 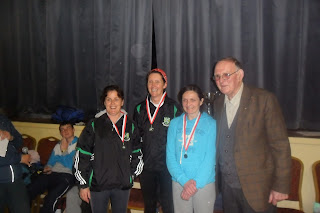 East Cork Road Racing Championships
A big well done to everyone who came to Ballynoe tonight especially all the ladies making it a record number again.We had great success with Sheila Buckley taking 3rd Bronze Medal and our ladies team Clair Fitzgerald, Margaret Jones and Helen Gilroy taking First Team.This is great running from a team consisting of people training for a marathon to come out and run this grueling 2 Km course.Thanks ladies for doing your club proud again also all the other ladies who came out and ran.Also those who came to support.
Our men also did great with Darragh Canavan (29.19) taking Silver and John Hennessy(29.23) taking bronze
Our men also got 2nd Team Kevin Smith,Marc Dalton,Denis Kelleher and Tom Cody.
Lost in the mists of time we won this race in its first running in 1980 with Pat White in a time of 25.18 yes 32 years ago and 25.18 and the following year 1981 we won it with Liam O'Brien then running with Midleton AC in a time 0f 25.38. So its great for the club to be back amongst the individual prizewinners again.
Danny