Exciting Announcement Thanks Again To Marc 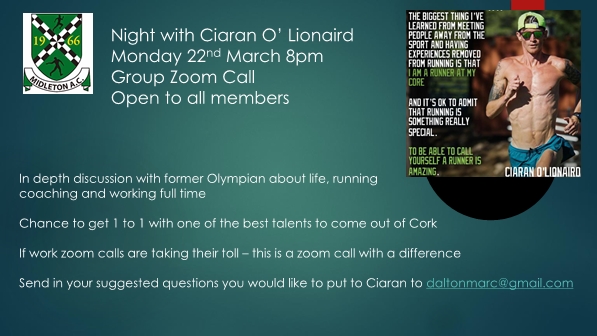 Your chance to chat with one of Ireland finest athletes.
Early years

Ciaran grew up just outside Macroom, County Cork, Ireland. He attended De La Salle College, Macroom, where he was an Irish Schools 1500 metre champion.[6] Ciaran first took up running at age 7 with West Muskerry AC,[7] but at age 12 joined Leevale to become coached by Der O'Donovan. It was at Leevale that Ciaran improved his times and ran an Irish Youths indoor record of 3:50 at age 16.[8] He went on to win a bronze medal at the European Youth Olympic Festival in Lignano in 2005 as well as taking 10th place in the World Youth Championships, both over the metric mile.[9]

In 2006, having finished school, Ciaran decided to take up a scholarship at the University of Michigan under Coach Ron Warhurst where he earned Academic All-Big Ten Conference three years in 2006, 2007 and 2008.[10] After numerous season-ending injuries (osteitis pubis, L5 disc herniation, hip bursitis) he decided to transfer to Florida State University in 2009. A recurrence of Ciaran’s back disc injury in 2010 led to 6 months on the sidelines and with surgery imminent, he thought his running career might well be over.[11] However, he battled through a summer of intense therapy and came back in the Autumn of 2010 to become All American at the NCAA Men's Division I Cross Country Championship.[12]

He is now back training and Tokyo is calling.

Posted by Midleton Athletic Club at 17:56