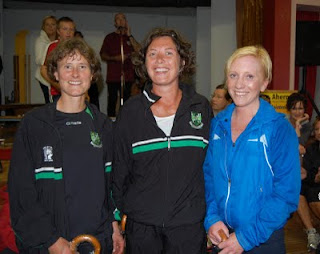 Well Done To All
Our three most successful ladies in the Ballycotton 5 series who all featured in the individual and overall prizewinners and also got first ladies team. Doing the club proud as usual.Not forgetting all our other ladies many of whom achieved PBs in the series and also those who successfully completed the series for the first time. 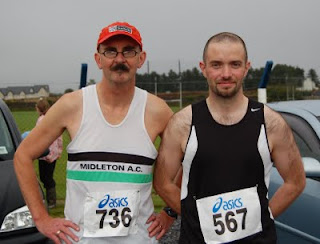 After a hectic summer of action, the race scene is certainly calming down at this stage with the main focus now the long distance events over the next few months. Dublin, Berlin and Dingle will have marathon representation from our club, whilst the Cork to Cobh ‘15’ mile race on October 4th is sure to attract plenty of local interest.

Before that all eyes will be on Blarney next Sunday where the John Buckley Sports sponsored St Finabarr’s AC promoted Cork Half Marathon will take place.

This event is an ideal preparatory race for either the Cork to Cobh challenge or indeed forthcoming marathon endeavours. To date it appears that there has been a large number of entries received, but if you haven’t managed to get your entry form away in the post, entries (25 euro) will be taken up until 10.15am on Sunday next.

The race has an 11am start and headquarters is just adjacent to the line at Blarney GAA Club. As for the course it’s a flat start and finish with the tricky part coming just before the mid way point where a tough hill awaits on the approach to Grenagh village. But what goes up must come down and after the descent it’s pretty much a flat run all the way home. A souvenir medallion is up for grabs for all finishers.

Fergal O Meara, Tom Cody and Richard Archer will all fly the local flag in the forthcoming Berlin Marathon, where the course is reported to be one of the best on the European scene. We wish the lads every success and no doubt they will enjoy the occasion and the weekend.

Dingle In The Diary

Dingle on Saturday next is in Denis Kelleher’s diary. Denis remarkably goes into another marathon following a summer of very restricted training due to injury. However, he knows what is ahead as only last Saturday week, he defied his own race predictions when completing the Longford Marathon in 4 hours 19 minutes. A date in Dublin on the last weekend in October is also on the agenda. No doubt Denis will be taking it ‘handy’ on what looks a tough challenge in West Kerry.

It’s also good to see plenty of interest in the Dublin Marathon this year. At present the total number of runners from our club with the event on their radar is in the region of 15 to 20.
Most runners are preparing with a long run at the weekend which is a central requirement of the big race preparation. If you are involved ask around at training regarding the various groups – it is always much easier to cover those long miles in company.

By all accounts a great weekend was enjoyed by those who travelled to Mayo for the club’s ‘weekend away’. It was by what we hear a hugely active few days co-ordinated by Edmond O’Sullivan and local native Maire Marshall. Apart from participating in the Claremorris ‘5’ mile event, there was a hectic social schedule by day and by night! As for the race action, the event was of high quality and was won by the highly regarded Gerry Ryan. Good performances were enjoyed by all our visiting group.

Last Wednesday saw the final evening fixture on the Cork BHAA calendar take place in Togher. The PTAA 5K again saw a big turn out from our club. Well done to Dan Horgan and Kathleen O’Connell who were amongst the category prize winners.

The curtain came down on the most successful ever Ballycotton Summer Series when the final race took place in the village on August 27. Appropriately the rain clouds blew away to leave Ballycotton looking it’s brilliant best as over 500 runners set an all time record for any race in the series.

Our high flying ladies trio of Michelle Nolan, Sally Drennan and Anne Geary took the club headlines on the night when winning the ladies team prize. Some more familiar names were again making the by now familiar journey on the prize path with Noel O’Regan, Neilius Aherne, Michelle Nolan, Sally Drennan, Elaine Hennessy, Margaret Rohan and Margaret Barry all taking the plaudits for their individual achievements.

At the end of the 4 race series we had Neilius Aherne, John Cashman, Dan Horgan and Alan Kelly making it into the Top 50 and thus collecting the souvineer tee shirts. Ned Ramsell, Trevor Moloney, Brian Healy, Billy O’Sullivan, Niall O’Neill, Kevin O’Reilly, Fergal O’Meara, Danny McCarthy, Kevin Morrisson and Jim McMurtry also completed all four races, showing some great form in the process during the course of the summer months.

- A reminder to all our female members that the Mini Marathon takes place on the streets of Cork on Sunday September 27th. You can enter on line for this 4 mile event on www.corkminimarathon.com

Remember it’s Midleton CBS on Monday evening from 6pm to 7pm where the emphasis is on speed work. These sessions will conclude on Monday next September 14th with training changing to Midleton College All Weather Pitch from Monday September 21st onwards. On Tuesday club members assemble for the next few weeks at Midleton Community Centre at 7pm for a run on the roads.

On September 30th it is the intention to have an Open Evening, with the emphasis on us all to welcome new members. It will also be an opportunity for the current members to meet and mingle outside of training or racing. The club’s winter training schedule will also be announced on that evening.

Finally, a reminder if you wish to receive regular club notes and notes via the e mail please give John Cashman your e mail address. Since it’s inception a few months back close on 50 members have signed in to receive regular updates.

In the meantime “keep on running”.
.
Posted by Midleton Athletic Club at 09:22