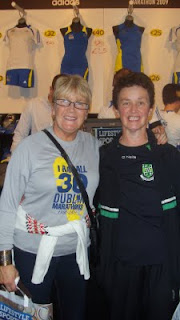 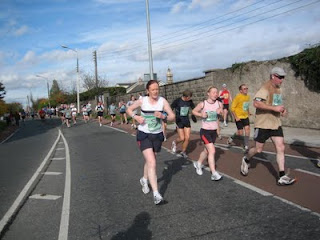 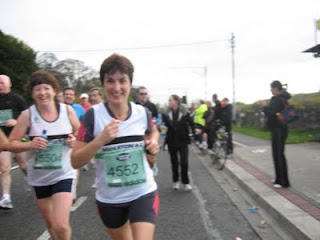 
Our calendars show winter has arrived, but our running schedules scarcely indicate a any great slow down of activity. Apart from possibly those with a marathon behind them, activity if anything is on the increase. Training on both Mondays and Wednesdays has seen continued growth with several new members joining our club in recent weeks. The race scene has also plenty happening, with next Sunday’s 5K in Lisgoold the latest local addition to a busy diary.

After the heavy rain of the previous 24 hours the floods initially looked like threatening last Sunday’s HSE ‘4’ Mile Race on the Marina Road Circuit. However, the event did the green light with over 300 runners on the start line. Midleton AC were well represented on the day and our Midleton News trio were amongst the prize winners in the team section. At present the full results of the race are not available but these will on the Cork BHAA web site later in the week and we will forward the results to all those on our club e mail list later this week.

As close on 11,000 runners made their way around Dublin City on Bank Holiday Monday for the 30th running of the Marathon weather conditions suggested that summer rather than winter was just around the corner. Clear skies, mid morning sunshine, just the lightest of breezes and temperatures in the mid teens certainly provided perfect conditions for the record entry which included 21 athletes from Midleton AC.
Thankfully, all survived the test of stamina with each no doubt having their own individual tale to tell at the end of the 26.2 mile trek. We had the experienced runners, the first timers and those who had to overcome injury to even make it to the start line all wearing the Midleton singlet with distinction, with many of them recording coveted personal best times.

As expected Noel O’Regan justified pre race predictions by turning in a scorching run of 2:47:22. Noel was followed across the line by Neilus Aherne (3:02:17), John Cashman (3:09:32) and our leading lady Michelle Nolan who had produced a brilliant run (3:12:27 ) to come home 3rd in the Over 35 category overall. Sean O’Sullivan (3:20:30), was next home followed by Adrian Williams and our second lady Breda Cahill who made a spectacular debut by clocking 3:36:25.

Marathon day proved a huge personal triumph for many of our club athletes who had suffered injury either earlier in the year or in the build up to the race. Adam Duchnicz and Margaret Barry both looked on the long term injury list in early summer but both made remarkable recoveries from their respective fractures to run the race in great style. Denis Kelleher running his third marathon in the last few months is another club man also had to beat the pain barrier on more than one occasion, whilst colleague Marc Dalton followed up the stamina sapping Cork event by having to overcome injury to complete his maiden journey around the capital.
Mary Toher clocked up another successful trip around the streets of Dublin whilst on the slightly less experienced end of the scale Anne Marie Parry, Kieran Murphy, Vincent O’Neill and debutantes Simon Thompson and Marie Murphy also had excellent outings.
It was also very much a special for two husband and wife combinations who made it a day of double delight. Danny McCarthy took his Dublin appearances into double figures with another steady run whilst his wife Joan chopped several minutes off her personal best time. Mary B. Walsh who knew all about what was ahead from previous experience also saw husband Mark make a fine debut breaking the 4 hour barrier despite fighting against injury in the build up to the race.

Before concluding special words of thanks to our club supporters who made the journey to support their colleagues. The sight of a familiar face and the sound of a familiar voice were a huge lift at various junctures of the course.
Finally in relation to the big race, a word of sincere congratulations to our good friend John Walshe (East Cork AC) who wrote another chapter in his remarkable running story when he became only one of 29 runners to compete all 30 editions of the Dublin Marathon. Well done John from all at Midleton AC!

Lisgoold 5Km
Time was when that come January it was always off to Lisgoold for the point to point races. Now there is a reason to go to the same venue for a race on the roads. The local GAA club in Lisgoold are at the heart of organising next Sunday’s race which is timed for 11am (changed from original 10am start). There will be a warm welcome for all runners at the local Community Centre which will host post race refreshments and the prize giving ceremony. Word has it that there is a bit of an uphill section early on the course, but there after reports are very positive. Entry fee for the event is 10 euro per person. Former Cork City Marathon winner Roy Fahy is resident in Lisgoold and has been amongst those lending some assistance in advance of the inaugural race.

3K Series Continues
The East Cork 3K Series continues on Tuesday November 10. Over 130 runners were present for the start of this year’s series and one would expect numbers could further grow as the popular winter event progresses. Again starting time is at 7.30pm and based on that continued high interest in the event the advice to get there early, get the car parked and maybe take in a few handy laps to warm up. After next week’s race there will be a further two races in the seven race series before Christmas.

Other Events
There are also other races on the immediate calendar with a local cross country fixture in East Cork on Sunday week giving runners an option of a change of surface. Youghal will host the County Masters & Intermediate Championships beginning at 11.30am. Midleton AC entries should be given to club secretary Tom Houlihan (085-1146109 ) at least one week in advance.
Back on the roads after next week’s action on Sunday and Tuesday, the following Sunday (15th) will see West Waterford AC host the annual Brickey ‘5’ mile race near Dungarvan in County Waterford. Starting time here is as usual at 11am. The next Cork BHAA race back on Leeside will take the runners to Inniscarra on Sunday November 22nd where the Murphy Memorial ‘4’ takes place., with an 11.30am start. It’s not the easiest ‘4’ miler as there is a bit of hill work involved, but it is run on pretty scenic route and usually attracts a good gathering from Midleton A.C.

Just a passing word on the Ballycotton ‘10’. As we know at this stage next year’s race has been rescheduled to Sunday March 21. In response to a few queries from club members these are the entry guide lines published by the organisers.

1) People can apply for forms anytime during November (up to Friday 27th) by sending a SAE to: Ballycotton Running Promotions, Ballycotton, Co Cork (see note below).

2) All forms will then be posted out on the weekend of Friday Nov 27th/Sunday Nov 29th - ideally to arrive with applicants by the following Monday or Tuesday.

3) The entry form will be put up on the website www.ballycottonrunning.com on Monday evening (Nov 30th), also in John Buckley Sports (Cork), Ger Wyley Sports (Dungarvan) and local shops in Ballycotton and Shanagarry that same afternoon.

4) The first 2,500 postal entries opened will be automatically accepted – regardless of who they are.

5) Entries for the following will be accepted by post up to and including Tuesday December 15th:

(b) All runners who completed the 2009 Ballycotton Summer Road Race Series (all four 5-mile events).

(c) All those who were entered but were unable to run the 2009 race AND returned their ChampionChip.

A bit nearer on the horizon – here is a brief summary of the fixture list on the roads over the next few weeks.

Stay In Touch At Midleton AC

Staying in touch with what is happening in our club is now easier than ever, as our new non interactive blog is now in operation. Check http://www.midletonathleticclub.blogspot.com/ for all the latest club news.

E mail contact is midletonac@ireland.com You may also have regular club news, updates and results sent directly to you via our club e mail service. Incidentally we have now close on 80 members on our regularly mailing list. Please give your e mail address to PRO John Cashman to avail of this service. Telephone enquiries regarding the club may be directed to Danny McCarthy on 087-2403940
Training
Training will be as usual right up until Christmas week. We meet between 6pm and 7pm each Monday at Midleton College. Then on Wednesday the beginner’s session is from 6pm at Midleton Community Centre and the usual club training is from 7pm to 8pm at the same venue. Remember to wear some form of reflective clothing on Wednesdays and the same rule very much applies for the 3K Series.

Christmas Party
Finally, it’s time to fill up the Christmas Social Diary. Again our club will host their annual Christmas Dinner at Garryvoe Hotel this year. Friday December 11th is the important date to remember with all members and partners welcome to attend. The occasion will also feature some musical entertainment and of course we will also be revealing the identity of the male and female ‘athletes of the year’ for 2009. - All in all a night not to be missed. Sale of tickets will follow in the near future.

Until next time – “keep on running”.
Posted by Midleton Athletic Club at 09:35

Labels: Dublin Marathon goes on and on