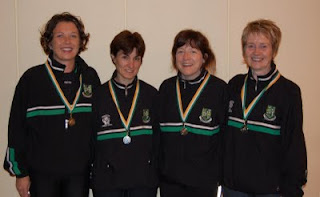 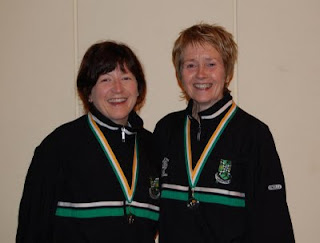 Marathon Ladies In The Limelight

It has been quite a few weeks for four members of Midleton AC who were amongst the 21 strong contingent that took part in the Dublin City Marathon. Previously we have reflected on the success of our crew but it has only been in the weeks after the race that the full results incorporating the National Championships have been published.

Thus, it is with great delight that we toast the feats of Michelle Nolan, Margaret Barry, Anne Marie Perry and Breda Cahill. All four have now National Marathon medals in their possession.

Apart from her success in the BHAA category Michelle competed a coveted double, taking the silver medal in the Over 35 category in the National Championship and taking third place overall in the Over 35 age bracket. Margaret Barry whose summer running ambitions looked as if they could be curtailed due to injury has recovered fully to scoop the silver medal at national level in the Over 60 category.
An unique feature of this memorable day is that Margaret’s daughter Anne Marie Perry combined with Breda Cahill and Michelle Nolan to win the silver medals in the Over 35 team event. The Midleton AC trio were beaten by just one minute for top spot by Raheny Shamrocks. Quite an achievement for Michelle, Anne Marie and Breda Cahill who herself produced a superb marathon debut.
So it is certainly time to raise a glass to our national stars in recognition of their superb achievements !

25th Marathon
One other footnote which came to light after the race is that Mary Toher completed her 25th marathon on that Bank Holiday Monday. Well done Mary on reaching the half century. Mary was quickly back in action as she competed in a Half Marathon in England on the following weekend.

Before we take a look at other activity on the roads, it’s time to remind everybody that the Midleton AC Christmas Dinner will take place at Garryvoe Hotel on Friday December 11th. Tickets for club members cost 35 euro and 40 euro for non members.

Please note all tickets must be paid for in advance of the function. Join us for what should be a great occasion. Names of those attending should be given to Sally Drennan at Wednesday training – payment should be made to Michelle Nolan at Monday training.

Back on the roads Midleton AC had a very sizeable turn out at the inaugural Lisgoold 5K race on Sunday week last. This was a well organised event which is likely to become part of the regular local fixture list. Glorious sunshine graced the race which featured a testing early uphill mile. Linda Geary made a welcome return to action, running an excellent race to finish as second lady. Margaret Beausang was top lady Over 45 whilst last year’s club female athlete of the year, Joan McCarthy continued her fine form by winning the Over 50 category.

Other positives from the day included the return of Stanislaw Byczek, who finished in 15th place (19:40) and also the return to this distance of the ever popular Kathleen O’Connell, who has missed much of the running season due to injury.

As expected a new high was reached in the East Cork 3K Series when nearly 190 runners took part in the East Cork 3K just a few days after the Lisgoold race. From a club point of view it was a significant evening as amongst the record number were quite a few of our newest members, who have taken up running lately and who were participating in their very first race. Their delight when crossing the finish line carved out a special memory for all concerned and no doubt all will be looking forward to more action and even stepping up their mileage further. Well done to all!
Up front there was certainly a pep in the step of many of our large contingent with Donal Broderick (11:09), Sean Kenny (11:27), John O’Connell (11:38), Mick Murphy (11:41), Sean O’Sullivan (11:45), Kevin Cooney (11:46), Trevor Mahoney (11:47) and Ned Ramsell (11:53) all breaking 12 minutes in fine style.

Race 3 in the Winter Series is listed for Tuesday December 1.

Before that the penultimate fixture on the Cork BHAA 2009 calendar will be staged on Sunday next. The Inniscarra Community Centre ‘4’ Mile Race is a relatively new event on the busy programme. It’s a hilly but scenic route with the start and finish adjacent to the Community Centre, where changing facilities are available. Refreshments and prize giving will also be held there afterwards. Note it’s an 11.30am start – ask locally amongst Midleton club members if you are unsure of the location or alternatively you can call the race organiser Maire Ni Chuinnean 021-7332124.

There is lots of variety amongst the forthcoming road race fixture list between now and the end of the year. The distances span from the 3K on December 1 and December 22 to a Half Marathon in Waterford on Saturday December 13th. Other highlights are the Shanagarry 5K on Saturday December 19th and the Newmarket to Kanturk ‘4’ Mile Race on the following day.

Looking briefly into the New Year, it’s worth noting that the Mallow ‘10’ is listed for Sunday January 10 and the Dungarvan ‘10’ three weeks later on January 31. Intending participants should note that the Dungarvan event is by pre entry only this year.

Training will be as usual right up until Christmas week. We meet between 6pm and 7pm each Monday at Midleton College. Then on Wednesday the beginner’s session is from 6pm at Midleton Community Centre and the usual club training is from 7pm to 8pm at the same venue. Remember to wear some form of reflective clothing on Wednesdays and the same rule very much applies for the 3K Series.


Midleton AC – Will Keep You In Touch

Check http://www.midletonathleticclub.blogspot.com/ for all the latest club news.

E mail contact is midletonac@ireland.com You may also have regular club news, updates and results sent directly to you via our club e mail service. Incidentally we have now close on 100 members on our regular mailing list. Please give your e mail address to PRO John Cashman to avail of this service. Telephone enquiries regarding the club may be directed to Danny McCarthy on 087-2403940

- “Keep On Running”
Posted by Midleton Athletic Club at 09:36