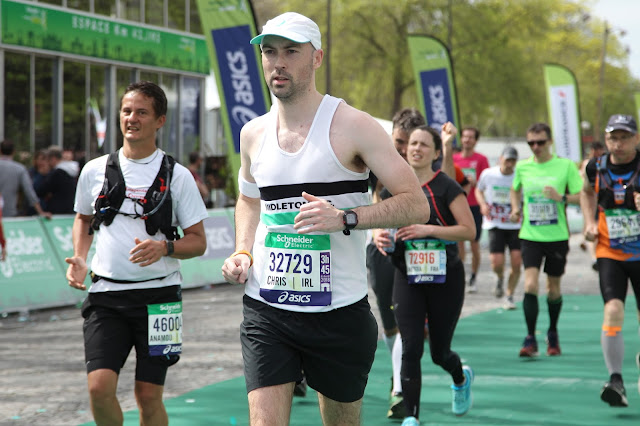 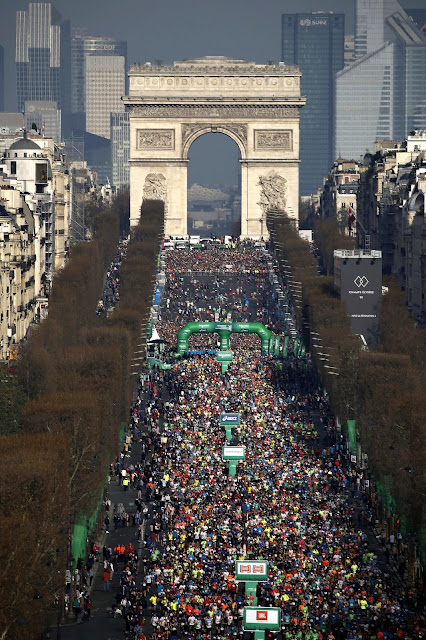 Sunday 08th April saw the Paris Marathon set off along the Champs Elysees in warm, sunny weather.
The route is pretty much wall to wall landmarks starting on the Champs Elysees with Arc De Triomphe behind you, passing Place De La Concorde, the Louvre, Place De La Bastille, Chateau De Vinciennes, Cathedrale Notre-Dame & Eiffel Tower before finishing on the way back to Arc De Triomphe.  It really is a beautiful route, the highlight for me was passing The Eiffel Tower. You run past it after 17 miles on the other side of the Seine and due to the angle you run it appears to be right next to you for hundreds of metres.
The weather began to catch people out in the 2nd half.  Unfortunately, 4 out of the 5 Marathons I have run have been in blazing heat so I am becoming used to it.  On this occasion there were numerous ambulances employed to help out those suffering from the conditions and hopefully none sustained any serious injury.  My enjoyment of running in the City did not give way to fatigue as the race progressed.  Due to the leisurely pace that I ran I was able to soak in everything around me and enjoyed every second of it.
The support on the route was really incredible which is to be expected at one of the largest Marathons in the world on a sunny day.  There were 42,513 finishers this year.
Apart from the Marathon there are no shortage of activities in the City.  The Louvre is a must.  Containing works by Leonardo Da Vinci, Raphael, Caravaggio, Titian, Vermeer & Rembrandt it has something for everyone.  I spent 4 hours there and could have stayed longer as the entire top floor was closed when I visited & I was unable to explore the gardens due to a downpour which was in stark contrast to Marathon Day.
Registration is already open for Paris 2019.  Is it worth participating in?
ABSOLUTELY!
Posted by Midleton Athletic Club at 13:08