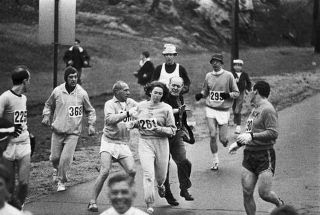 In 1967, Kathrine Switzer was the first woman to run the Boston m...arathon. After realizing that a woman was running, race organizer Jock Semple went after Switzer shouting, “Get the hell out of my race and give me those numbers.” However, Switzer’s boyfriend and other male runners provided a protective shield during the entire marathon.The photographs taken of the incident made world headlines, and Kathrine later won the NYC marathon with a time of 3:07:29. Danny
Posted by Midleton Athletic Club at 14:24