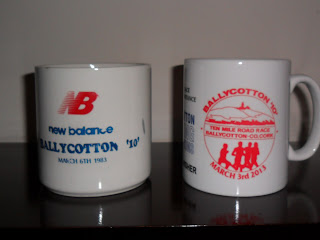 A Tale Of Two Mugs

(or The Mug You Could Not Wash)

In 1983 I ran my first Ballycotton 10 and funnily I don’t remember too much about it except the mug we received. I983 was the beginning of what is now referred to as the First Running Boom and lots of people were starting to take up running so there was a large crowd from my workplace taking part in the race. The morning after I arrived into work to be greeted by “How’s your mug ?” I replied “My mug is fine “ only to discover that most people’s mugs were now blank and had no Ballycotton crest. I had been so proud of mine that I immediately placed it on the mantle piece at home and did not touch it. Most others had tea/coffee in theirs and had then to wash them. As the mugs had not been fired properly by the potters the crest washed off. So my mug has never been washed since 1983 and shall remain unwashed. I wonder how many miles I have clocked up between then and now .I don’t know if anyone else has an intact 1983 mug even the great John Walsh the main organiser of the race does not have one.
Danny

Posted by Midleton Athletic Club at 18:14