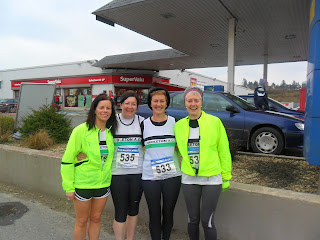 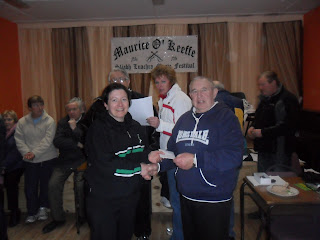 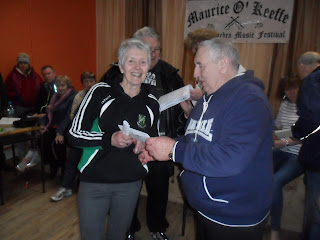 Today Monday 1st April saw the annual Boherbue to Kiskeam take place over a very windy and cold course.There was a much larger than usual crowd taking part with some of the fastest runners in the county taking part.The race was won by Marc Hanrahan in 18.38 with James Mc Carthy 2 nd in 19.24 and to make it a double Laura Crowe was first lady in 21.41.
Our Midleton Ac ladies were in the winning positions again with Anne Marie Perry really getting back on form taking 1st O/40 followed by Joan McCarthy 1st O/55 and a lady who is really coming back to form Margaret Barry 1st O/60.
Margaret Twohig ran a great race and narrowly missed out on the prizes. Marie Gillman of the Dev. Group ran a superb race coming in just over the thirty two min mark.
Our first man home (as he says himself the only man) was the great Tom Cody taking 2nd O/55.
There was a total of 134 runners took part in a very well organised event with some of the best prizes of any race around on offer and a great spread after made the journey well worth while.
Danny
Please let me know if anyone took part in any other races over the weekend e mail mdtacinfo@gmail.com
Danny
Saturday
Midleton AC Ladies Win Again
Ballybunion Half Marathon & 10Km.

Midleton AC Ladies went to Kerry this weekend and on what was described as a horrendous course with hills galore and very strong winds Sheila Buckley came home 1st Lady in a time of just over 91mins and not being content with winning her catogery as per usual
Helen Gilroy came home 2nd Lady overall in a time of 96 mins. Super results ladies.Catherine Terry ably assisted by the ever solid Pat Walsh
came home 4th Lady.

Bernie Twomey who is in training for Rotterdam Marathon came home very comfortable in a time of 1.52 approx. and won 2nd O/40 for her effort There was a 10Km there also in which Frances Maunsell appears to be our sole runner here came home 7th overall and also won 2nd O/40.
Looks like it was well worth the journey lads.
Danny

Tonight Friday in the Marina 5Km Michelle Kenny got her first hat trick by getting her third win in a row in a time of 19.21 she was followed home by new member Karen Grant 2nd in a time of 19.43. Other ladies who took prizes were Margaret Twohig running a great race to take 1st O/45 and Joan Mc Carthy 1st O/55 . Susan Delaney continues to improve with each run and will soon be back to full form.

In the mens race which was won by Alan O'Shea our first man home in what looks like under nineteen mins was Paul Spiteri closely followed by new member David Motherway. James Moore and Shane Gannon had excellent runs as had Simon Fitzgerald and Marc Walsh who it was great to see back running injury free.

There was a total of 255 runners took part and great praise must go to the organisers who had plenty of stewards out and had a fine spread after.Kevin Cummins from BHAA who helped with the organising said a new record was made in that all the prize winners were present to collect their prizes.There was also a huge amount of spots on offer. Apologies if I missed anyone but it was quite dark at the end and again please let me know if you are doing any races and want them mentioned  E mail mdtacinfo@gmail.com

Kevin Cooney did his first race for a long time last night in Killarney. He did 35.43 for 5 miles and found it tough but was glad to get back  Still a  way to go to go but wont be long before he is race fit again .Great to see you on the way back Kevin.