Climb a mountain, Jump in a lake anything to avoid Cross Country by Edmond O'Sullivan 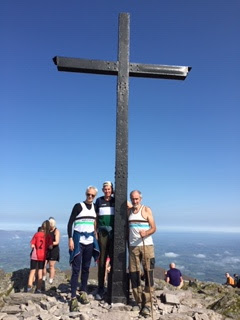 Unable to take part in the cross country last Sunday, 1 super-elite over 55 athlete and 2 fairly average over 60 athletes struck off for a training camp on Carrantuohil. Up the Devils Ladder like a troupe of mountain goats followed by a sprint finish to the base of the cross...similar to the biblical Peter and Johns’ dash to our Lords tomb, the super elite athlete controversially reached the cross first.

All three athletes were absolutely delighted with the club success relayed to the summit from Carrignavar. Well done all athletes.Midleton AC athletes and all members, with such phenomenal success for the club, bear a huge debt of gratitude to Danny and Sally for doggedly keeping the cross country arm of the club alive for so many years, often in appalling weather and with very small representation by our members. Thank you SO much, Danny and Sally.
Posted by Midleton Athletic Club at 18:17