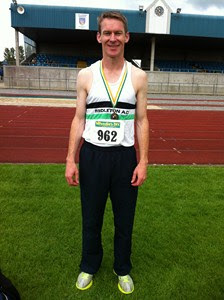 John Hennessy with his National Medal

NEWSLETTER
Midleton AC Senior Section Monday 22nd August 2011
By PETER GUNNING
An eclectic mix of venues and events was on offer for our runners over the past two weeks. The Clew Bay Half Marathon, The Route to Crook 5 miler in Crookhaven, The John Hartnett 10k in Ballyhooly, the Ardmore 5 and the Cloyne 5k ensured variety in terms of both distance and scenery.


Closest to home the Round Tower provided the scenic backdrop in Cloyne for the second running of the community fundraising 5k. It was also the second running in the rain of this superb little race as once again the black clouds opened. However the weather conditions did not deter the huge entry with sixty-four of the four hundred finishers wearing the white, black and green of Midleton AC. This is an excellent road-race. Race-orgainser, Mags Twohig and her highly efficient committee can feel justifiably proud in having created an event indelibly indexed on the Cork County Road Race calendar. The well-marshalled course is fast yet challenging with the majority of our members recording pleasing times.

Tom Cody, Kevin Smith and Denis Kelleher all enjoyed the change of scene in picturesque Crookhaven with Kevin finishing fourth overall in 29:16. Tom was ninth in 32:02 (needless to add first in 0-55!) while ultra-runner Denis made the journey most worthwhile in finishing 16th in 33:07.

Tom was on the podium yet again a few days later winning the 0-55 in the John Hartnett 10k in Ballyhooly and finishing tenth overall in an impressive 40:05. Well done also to Chris Murphy who finished 2nd in the ladies 0-35 in 49:11. Chris used the race as part of her marathon preparation for Dublin in October. On a demandingly hilly course, good runs were also enjoyed by Danny McCarthy, Nicola McPherson, Joan McCarthy and Mary O’Mahony.

Marc Dalton led the Midleton charge in Ardmore clocking yet another sub-30 as he finished in 29:25. The ubiquitous Tom Cody followed him over the line in 31:16 to take another category prize with Mr Yet-Another-P-B-Fergal O’Meara at 31:32. John Cashman is enjoying a fine season and was delighted to dip 32 minutes finishing in a comfortable 31:34. Breda Cahill in 34:12 continues to improve in both endurance and speed which should see her running an excellent Dublin Marathon in October. Danny McCarthy, Denis Kelleher and Brian Nolan enjoyed their night’s running at the West Waterford venue as did Moira Morrissey.

In Louisburgh Co Mayo Claire O’Leary was our solitary entry in the Clew Bay half-marathon. Indeed while wearing the Midelton AC vest Claire was the sole representative from her county. Claire dispelled the loneliness and thoroughly enjoyed her day with a great run in the west. She recommends a club outing to Clew Bay next year!

While Tom Cody deserves the plaudits for his prize winning exploits over the past two weeks a pride of place must go to John Hennessy who took a 1500m bronze medal at the All-Ireland vets in Dublin this weekend. This is the first time in many years since the club has medalled in this competition. John, your club colleagues salute you!

The 5 mile summer series concludes in Ballycotton on Thursday night next with several of our athletes set to receive the much coveted top finishers’ T-shirts. Each runner’s aggregate time for all four races will determine the top fifty men and the top twenty ladies. Kevin Smith goes in to the final race looking for a top ten overall spot and if Marc Dalton continues his impressive form of late he may join Kevin in the amongst the single digit eilte. Adam Duchnicz, Tom Cody and our leading junior, Michael Furlong are all well inside the Top-50 cut off point. A solid run from Mick Murphy should also see him choosing between a medium or large (I’d say large would suit you better Mick!). Our ladies too are well placed with Anne Geary, Sally Drennan, Anna Doris, Breda Cahill, Mary O’Keeffe and Marie Murphy all comfortably within the top twenty. Several of our athletes will receive commemorative plaques to mark their achievement in completing all four races. Well done to all. Thursday’s race will complete the quartet which began in Ballyhandreen in May.

Until next time keep on running....

MESSAGE RE BUS TO WATERFORD HALF MARATHON

Eagle AC are hiring a bus to take runners to Waterford on Sat Sept 3rd. It's a 30 seater, but Eagle AC only have 15 going by bus, so they expect to have 10+ spare seats. They are charging members €10 each and are offering seats at the same price to Midleton AC and St Barrs, to fill the bus. Places will be filled on a first come, first served basis.

They will pick up the Midleton people at the Roundabout (or another convenient location) and drop them back to the same spot. (can also pick up further along en route, if that's more convenient)

If anyone wants to come with us, mail John Dunphy (he's looking after the bus) at dunphyj36@hotmail.com

Meeting at City Hall side entrance facing the Clarion Hotel at 9.15am, coach leaves 9.30am sharp. Race start time is 1pm on Saturday 3rd of Sep 2011
Return trip leaving Waterford RSC at 17.00pm, this will allow sufficient time for refreshments and prizes after the half Marathon. (NB: Bus will leave once the presentation of prizes is

Posted by Midleton Athletic Club at 11:05