We Has Some Fun at the "Captain's Run" 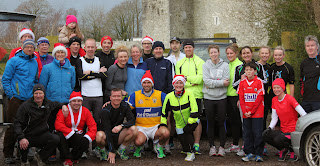 Christmas Eve saw this years running of the Captains Run organised by Capt. Noel O'Regan assisted by Capt.Sally Drennan and the driver of the Magic Bus Edmond O'Sullivan. This year saw a bigger crowd than usual plus a big number of supporters including some ex members who in the true spirit of athletics lent their support and help. Our two Athletes Of The Year were there Sheila Buckley who ran and Mike Dolphin accompanied by his beautiful daughter Sally (who Santa will definitely be visiting tonight).
We had Helena Connolly from the beginners group doing her second 5Km in two days and was rewarded with a special prize from the Captain. The weather was great except for the strong cold wind but people were warmed up after by tea,coffee, cake etc and a very special recovery drink provided by the captains. Yes Santa made a very special appearance in the form of old friend Ned Ramsell. A total of 191 Euro was raised for Suicide Awareness . 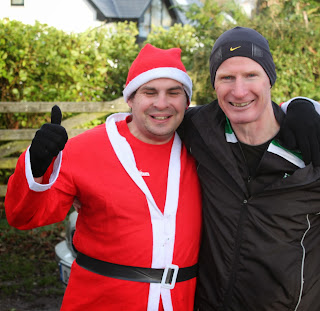 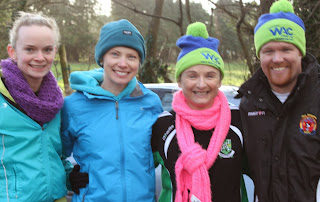 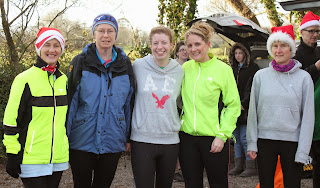