An Irishman’s Diary about a famous Cork road-race 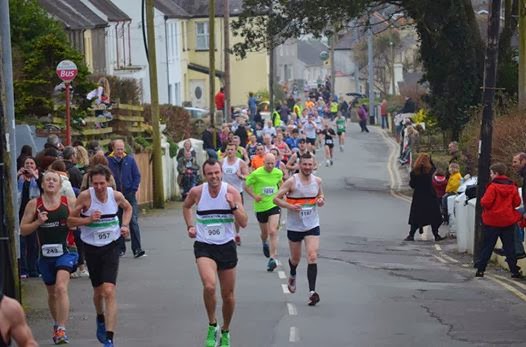 The start of the Ballycotton 10-mile road race is a bit like the running of the bulls in Pamplona. Before the off, participants are penned into a narrow corral, the village’s main street. So when the gun goes, there’s a mad, adrenaline-fuelled rush forward, motivated by a mixture of competitive instinct and fear.


From then, for about a mile, your attention is divided about equally between the forest of legs in front of you, which at least you can see, and the sound of the stampeding hooves behind. An invisible clip from one of the latter and you could find yourself in violent collision with the surface of Ballycotton, which is not nearly as soft as it sounds.


At least there are no actual bulls involved, although with some participants, the testosterone levels are similar.


Half a kilometre into last Sunday’s race, for example, while most people were still picking their steps carefully, I was passed by a lad in a Derry GAA jersey, who was slaloming through the field like his tail was on fire. All he was missing was horns.


Once out of the village, happily, everyone can relax a little. Thereafter, the gentle country roads of east Cork sift the 3,000 runners and sort them into order. By the time the leaders reach Ballymaloe House, half-way, the field behind is as strung out as a seven-course meal by Darina Allen, with about three miles separating the hors d’oeuvres from dessert.


Beyond Ballymaloe, the runners turn for home again, at first by a different route, then retracing their steps from the opening miles. There is only one way in and out of Ballycotton.


Consequently, as I remembered from my debut last year, the hill you didn’t notice much when you were running down it at the start is now waiting for you on the way back.


This year, I also benefitted from the wise advice of Noel from Leevale, a veteran of 13 Ballycottons, who told me beforehand that when I saw the lighthouse straight ahead, I’d know I had two miles go. “Look at it once,” he cautioned. “Then don’t look again.” In fact, I barely saw it at all, so grimly was I focussed on the road by that point.


But I knew it was there and it guided me in.


Now in its 37th year, the Ballycotton 10 is an extraordinary event. Relative to the venue’s size, it’s bigger than the New York marathon. For a few hours every year, it hits this tiny peninsular outpost like a storm and threatens to overwhelm the coastal defences. But somehow the village survives, and you don’t hear any locals complaining.


Then again, if it wasn’t for the race, Ballycotton would still be best known for the Divine Rapture debacle of 1995, when an elite field of Hollywood actors, including Marlon Brando and Johnny Depp, breezed through the area for two weeks, before it emerged that there was no money behind it.


Not even the Ballycotton lifeboat could save the film, which sank with all hands, and a lot of unpaid bills.


In contrast, hosting a race that’s a victim of its own success, as some critics suggest, is still a public relations triumph. Having started with an entry of 31 back in 1978, the Ballycotton 10 has since survived three and a half decades of growing popularity. Entries only passed the 1,000 mark in the early 1990s, at the end of the first running boom. This year, amidst a second one, they had to capped at 3,600.


Despite its name, incidentally, this is one of the few big races that doesn’t reward finishers with a commemorative T-shirt. It’s an occupational hazard of running these days that you accumulate more dated clotheswear than a vintage boutique. So even with a ready-made slogan (“This is not a cotton T-shirt, it’s a Ballycotton one“), the east Cork race resists the urge to add to them, presenting finishers with a commemorative mug instead.


So proud was I of my souvenir that I took my first-ever selfie with it afterwards – a mug-shot, if you will. 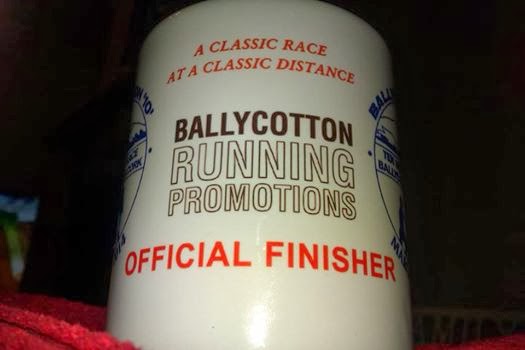 But of course it’s not a mug, as I’ve since explained to certain close relatives of mine who mistook last year’s trophy for household crockery and broke it within weeks. I won’t be making the same mistake again.


This year’s mug is going on the top shelf of the press. It will not be coming down even for visitors.