It's is recognised as one of the biggest races of it's kind in Ireland - the Ballinttois '4' Mile Road Race and it's very much part of the early summer fixture list here in East Cork.

This year's race will take place on Thursday April 20th (8pm) and is again expected to attract a very large entry. In fact entries via the online option are steadily being received and that option remains open to participants until Monday April 17th. Thereafter, entry desks will be open from  5pm to 7pm on the evening prior to the  race and then again on race day from 1pm onwards at Ballintotis Community Centre.
The success of the event which was brought to the picturesque venue by East Cork A.C in 2010, is due to a number of factors. It's fair to say that the generous sponsorship and backing from the local business community has been a key component in it's rise and with this in mind, the local Ballintotis Race Committee wish to acknowledge again the continued backing of a number of their loyal major sponsors.
Sincere thanks to main sponsors Castlemarty Resort, Trabolgan Holiday Centre, Garryvoe Hotel, McCarthy & McGrath Auctioneers, Ballintotis Fit 4Life Club, Market Green Shopping Centre, Michael Kennedy Plant & Agri and Eurocom Technologies for their sponsorship of this year's event.
As  usual all proceeds from the race will go towards and development of Ballintotis Community Centre.

In advance of this year's race,a trial run around the course for members of local clubs will take place on Tuesday April 11th at 7pm..

In the meantime for those wishing to find out more details about the race or indeed to contribute to the race sponsorship fund/donate a prize - please call 086-8778182.

Remember this year's race will  again by chipped timed, with a mat at both the start and finish lines, whilst those who may prefer to walk rather than run are pointed in the direction  of the non competitive walk  which begins at 6.30pm.  Entry fee on the day for the run or walk costs 10 euro with all participants receiving a free buff, courtesy of McCarthy & McGrath Auctioneers. Refreshments will be served afterwards with loads of spot prizes to be won together with the usual overall and category race prizes 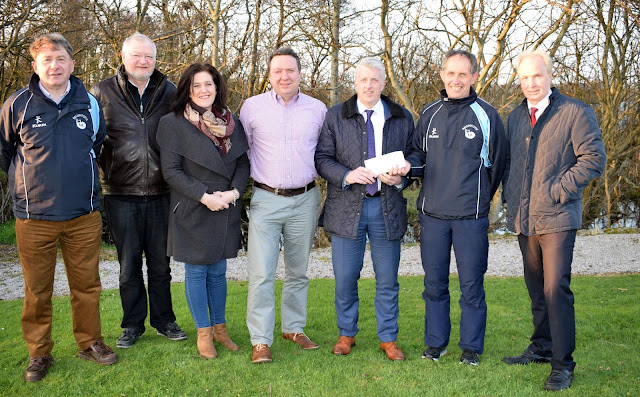 Martin Drake and Tim Twomey of the East Cork Athletics Division join sponsors and members of the organising committee on the start line ahead of the Ballintotis 4 MIle Road Race which takes place on Thursday April 20th. On line entry is now open at www.ballintotis.com
Posted by Midleton Athletic Club at 08:30