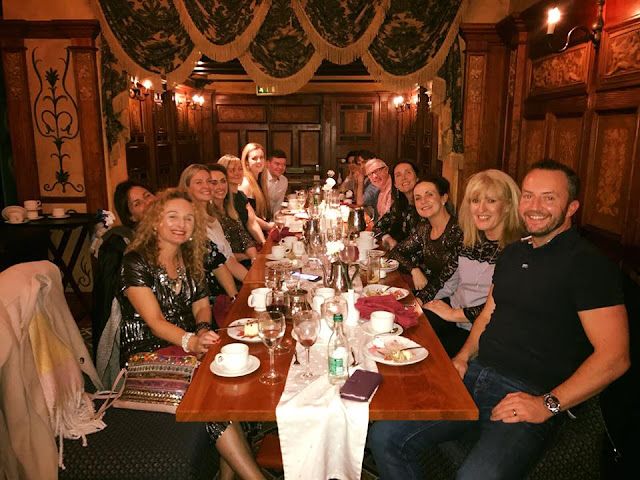 Saturday 11th November was an early start for some members on a dark and damp morning with cars filling up at Lakeview, Ballyseedy and Cork with runners, the majority of whom cursed the 5.30am alarm along with whoever said it was a great idea.

"What? The race is in Listowel, I thought it was Killarney? How long will that take?". Not long at all as it turned out, quick pit stop in Killarney and Tralee for fuel, before pitching up in Market Street Listowel for an efficient number pick up as it bucketed down with rain that had cleared by the time the new club singlets and the new old singlets, bought at a snip, were standing out in the rain at the start in Listowel racecourse. The gloom was quickly lifted by a local TD who happily posed with all comers for pictures, including the crew of "Living with Bernie" who squeezed him into a double header that day having completed the previous weeks episode with Sonia. He cleared half the crowd when a shotgun was fired into the sky to set off the half marathon, followed quickly by a second shot for the 10K which was literally done mid sentence with this scribe "whey are u from your shelf? ...hang on, I musht do dish....BANG.....Midleton AAA-SHEE, lovely, shure ye are all stone mad with dish running lark" and off he went again. Far from mad but where else would you get it?

First home in the 10K was Mags Jones, flying, 6th woman home and first in her category but a chip mixup meant that like many great Irish runners, she didn't get to stand on the podium on the day itself - but not a word of complaint. Next home were Karen and Máire, who yapped their way and had the greatest non sprint finish ever trying hard not to beat each other. We had two guests, Mark & Michael, who were going so fast at the finish they had to do it again for the photographer, followed byBernie Twomey who sprinted home to be ready for the pics with any celebs that might be hanging around. Shevaun Hogan flew in next with an eye-catching headband followed quickly by Annette Fitzgerald who looked very comfortable and then Sheila Bulman came next, running so fast that she wound back time. Like a good Fr Ted episode, Sheila Buckley wasn't able to make it, having to work all weekend to help people file their taxes last minute, and Máire took her 10K place and Sheila Bulman got her time - but the clock doesn't lie, so well done Sheila!

In the half, we were down to one runner, as while those in Cork got up at 5.30am, an fear as Daingean(Declan Dorgan)read the weather warning text and thought better of trying to run on the back of a night out. The one runner didn't disappoint, Helen Gilroy was star of the day, storming home as 2nd woman, getting a well deserved place on the podium and a nice little prize. We thought we might have the wine covered for dinner but then the boys had Conway for first try in Paddy Power and when they wouldn't spend their winnings for just filling out a slip, we couldn't harass Helen any more. It was a mighty run by Helen and she just continues to perform year in year out, rarely out of the prizes as well as being a fantastic supporter of club events and members.

Before departing, amid the tea and the prizes and the shivering and the changes of clothing Bernie nabbed the famous Freddy Stuk for second episode of her new program. He won the Half in 73 mins, a training run for him on what he described as a 66/67 min course! For those who don't know, Freddy was 4th in the Dublin Marathon and ended up in the middle of an Irish athletics controversy where he was Irish champion then not. An absolute gent, and while one can question the rules that mean 6 months residency allow you to compete for the Irish title, he inadvertently broke his 6 months going home for 2 weeks to see his mother. He was in the words of all "lovely" although he did relay that his friends in Kenya think the Cork guys who come to train there do not speak English.

The trip back to Killarney had a lot more chat then the first trip of the day and it wasn't long before cars were parked and bodies checked in to the Avenue and a quick dash over the road for lunch in Hannigans. For the rest of the afternoon there was introductions, food, wine, pints, bets, shopping in the tidiest Penny's in Ireland before all magically appeared in their finery for dinner at 6pm the Avenue Hotel.

It seems that Prosecco is a more favourable recovery than a protein shake for 10k runners and the crack was good at the table, as we devoured a great menu and the hours slipped by; and we managed to squeeze in the group photo before Sheila lost patience and subjected us to the soccer.

All in all, it was a great day and night, we got great value for money at the race and at a lovely hotel. We did this 4 years ago with race in Killarney and we'd approx 16 who stayed and 20 who ran. This year we'd similar numbers staying but less running. The dates didn't suit many but we have to celebrate those who came and it was a great group - all good fun and easy to deal with. A big shout out to the folks who were doing their first trip........there was plenty of advice shared along with plenty of nonsense and fun too. Until the next trip.......Keep running and having fun.

Posted by Midleton Athletic Club at 21:33