WHAT A WEEKEND
Up Midleton

Not only did Midleton win the County Hunling Final our athletes excelled as well.

Having left the Marina and HSE 4 mile I then headed to Riverstick to witness what was a historic occasion in Cork athletics where the opening of the new cross country facilities took place. The weather here was very wet and miserable but it was well worth it as mens Captain Noel O'Regan said it was a rare occasion.
Unfortunately we had only one athlete competing but she sure did compete.Michelle Kenny really did us proud as a club by coming second behind Lizzie Lee in the Senior County Championships. She ran what can only be described as a superb race holding her position of 4th  throughout and only moving up in the last few hundred meters despite being roared at to go earlier at the 1km mark she held her head and made her challenge perfectly   passing the third athlete with ease she then upped her speed on the hill and passed the great Carmel Crowley in the last 200 meters. This was truly super running using not just her legs but her brain as well.
Great credit must go to Stan Byczek her coach who along with Matt Chojan set up the Sat morning cross country group.One must also not forget the amount of track work and races Michelle put in this Summer  as this really stood to her today as will her cross country next track season.Also to Sally Drennan without whom as Noel O'Regan said today we would have no cross country teams or runners. The only regret is that we did not have a team there today as we definitely  would have been in the medals. 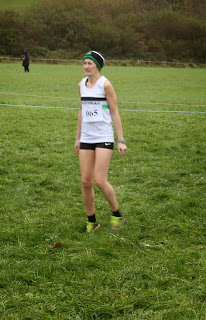 At the start in the rain and cold 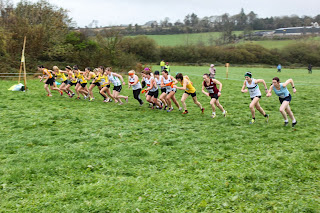 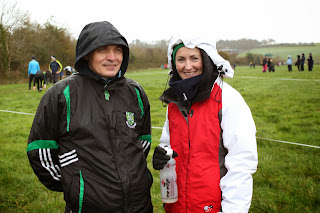 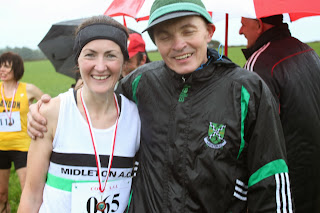 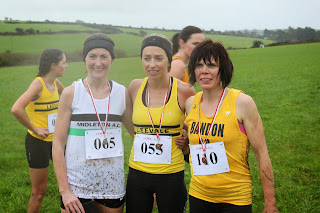 Winning this race in great style Sheila Buckley did the hard work she has put in this season justice.She led from start to finish with ease not challenged at any stage.It is so good to see Sheila get her 2nd victory ever after winning the Ballybunion Half its great to see her doing it on home soil.
She was followed home in 3rd place with a great run by Joanne O'Mahony We had far too many athletes here to give individual mentions but suffice to say all ran well.Special mention must go to our oldest member Billy Griffin who as always ran a great race only this time in runners. (those who know Billy will know what I mean) but it was great to see so many Mdt AC athletes take part. Other prizewinners were

Don Ryan had a great run in New York and came home in a great time of 3.31.06 He says he found it really tough but all his training paid off but the hills caught him over the bridges.
He lost a lot of time on the hills and never managed to quite make it back.He finished 7.30,7.20.7.30 with some really fine running so he should be chuffed as he is and is now off to celebrate and as he says that why the course record for NY is 2.08.
Well done Don and I am sure the Mideton AC colour's even earned you a few extra cheers in New York. 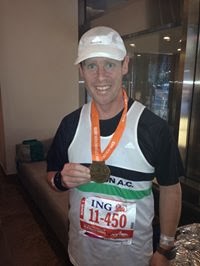 From New York to Riverstick and points in between.

We want to wish the very best to ALL our athletes running this weekend .We have Don Ryan running in the New York Marathon. We really hope Don has a great one as he really has put in the work with the various groups he runs with and at this stage has lots of experience of marathon running.So lets hope he gets the result he so richly deserves.
In the meantime he has just discovered that some other passenger has walked off with his hand luggage containing his entry form and their passports.Lets hope and pray that this is sorted out soon.
Great news just in Don have got his luggage back.

The best of luck also to everyone running in the County Senior and Junior Cross Country in Riverstick on Sunday.

The annual HSE 4 Mile BHAA takes place in the Marina on Sunday at 11am. This really is a very nice race and has been going for many's the year. Well worth supporting and a great catch up on last weekends events and you can still make the cross country in Riverstick to support after.

October 28 – County Junior & Senior Cross Country Championships
The County Junior & Senior Cross Country championships take place this Sunday in Riverstick starting @ 1pm with the junior race. The race this year is taking place in a venue that is owned by the county board, purchased with the proceeds of the Cork Womens Mini Marathon.  This will be the first competition to be held at the venue which will, in years to come, become the home of athletics in Cork. Fantastic work has been done by the committee charged with developing the venue.
Medal winners on Sunday will receive a special commemorative medal in light of this being the first competition to be held at the venue.
Last years championships, held in Carrignavar were dominated by Leevale and Togher athletic clubs with Togher winning both junior team titles and Leevale winning both senior titles.  Defending Junior Womens Champion Rachel O’Shea of West Muskerry recently won the county under 19 cross country.  There will be a new junior mens champion as last years Junior Mens Champion Cullen Lynch ofTogher, who was 3rd in the Munster Under 23 cross country, is now over age.  Lizzie Lee and Mark Hanrahan of Leevale, who have dominated the senior races for the last few years look set to retain their titles but will they lead Leevale to another senior club double ?  East Cork, St Finbarrs and Togher will be out to do their best to prevent this.  A very exciting days competition lies ahead!

This blog belongs to the Club and is open to all submissions.We want you to submit reports of the races you run.There is no way we can be on top of every race members run. We ask and have constantly asked members to submit their results/reports/photos etc. and if you are not getting the credit you deserve it is UP TO YOU to submit the reports and photos etc.

When I attend an race I can do a report if I am not at that event it has to be up to those there to report what way they want it blogged.( ie Basic Results or a report on how people ran etc.)
There is NO P.R.O. in the senior section at present so if someone wants to put themselves forward I am certain the committee would be delighted to consider their application.
In the meantime if you want coverage please email Photos and REPORTS to mdtacinfo@gmail.com 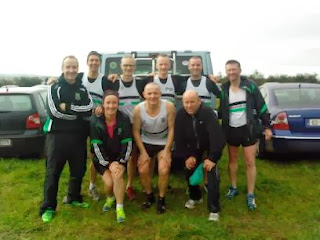 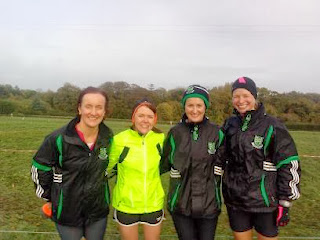 Some shots of the recent victorious individuals and Cross Country Teams
Posted by Midleton Athletic Club at 17:46