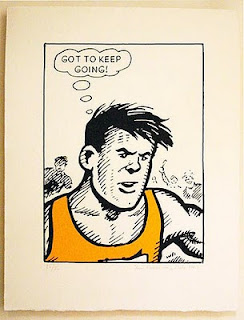 
Ciobanu set a new course record of 2:25:54 when claiming top honours in Cork last year and will be expected to have a major say in the destination of the prizes in Ballycotton. The Moldovan who has also claimed the National Marathon title in Dublin finished runner up to Latvian Floroseks Mareks in the opening race of the John Buckley Sports sponsored Spring Series in Dungarvan in late January. On the day he clocked just under 5 minute mile pace to cross the line in 49:49 on what was a perfect day for running.


With weather indications again looking favourable for Sunday next Ciobanu who runs with Clonliffe Harriers will be all out to continue his impressive recent record.


Last year’s runner up in Ballycotton, Mick Clohisey is set for a return visit to the East Cork village, after finishing 22 seconds behind surprise winner Greg Roberts from City of Derry AC twelve months ago.


Incidentally Clohisey and Ciobanu were in opposition only last Sunday on grass when the Dubliner finished third three places ahead of his rival at the Woodies National Inter Club Cross Country Championships in Santry. The field also featured Sean Hehir of Rathfarnham who came in ninth place and is also heading south this weekend for the Ballycotton showpiece.


Meantime, Colin Merritt of Carraig na bhFear AC also looks set to take his place on the start line. He finished fourth in the aforementioned Series opener in Dungarvan this year and was third home in the Cork City Marathon last year.


More details of the final list of elite runners is expected to be known within the next twenty four hours.

Additional stewards are required in various areas of the course. Those wishing to give a helping hand are asked to contact Tommy Hartnett on 086-2386390
also help needed to pack goody bags Fri night at 7.30


The below is taken from John Desmonds blog Running In Cork


This is just a reminder for all new runners who are not able to run on the day....You CANNOT transfer your race number to anyone else!

There are 2 main reasons for this...
1) The race can only handle around 2,500 at most. The roads in the area are narrow and access is a major issue. Hence, the cut-off for entries back in December and the restriction on numbers. The organisers know that a certain percentage of runners won't turn up on the day and they take this into account when taking entries. If there is wholesale swapping of numbers then it makes this exercise pointless.

This has been going on for a number of years despite the best efforts of the organisers. After the 2010 race, Ballycotton Running Promotions took the unprecedented step of putting the names and photographs of people who ran with swapped numbers up on their website.

Some people may take the view that it's no big deal to run with someone else's number but it is the one condition that the organisers are adamant about. At the end of the entry form for the race, you signed a form which said that you would not transfer your race number. If your signature has any value then don't transfer your number.

Statement from Ballycotton Running Promotions...
You cannot give your number to another runner. Last year, despite our warnings, a few runners again ignored this rule. As a result, we took the unprecedented step of publishing pictures of people not wearing the correct number on our website. We are prepared to do the same this year and also will not accept entries from the offending parties for next year’s race. So don’t say you haven’t been warned!
Please do not have your club named and shamed

Posted by Midleton Athletic Club at 09:20