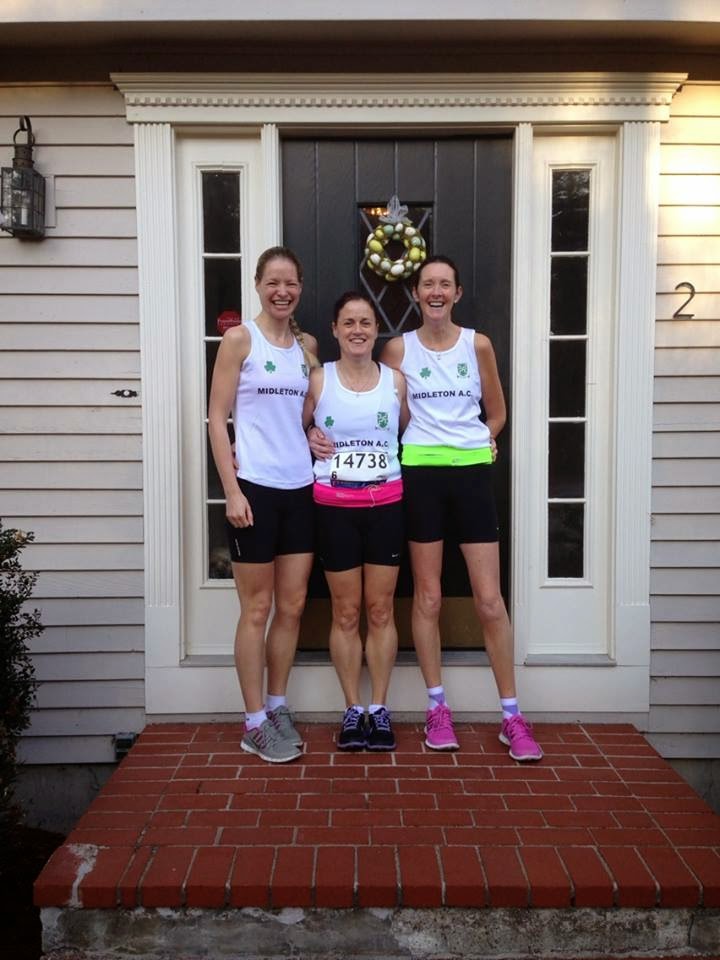 By all accounts the conditions were tough here today and from watching the second half it looked that way. No details yet from the girls but Margaret Jones first home in 3.54.28 and Helen and Sheila finished together in 4.01.01.  Well done ladies it certainly appears to have been a tough one.
A totally amazing marathon and experience is how Helen describes it unfortunately they ran into trouble around the 11 mile mark so they stopped the watches and concentrated on finishing and getting that medal. They worked together like true club mates and struggled to get over that line. Fifteen  miles is some distance to run when you are in trouble but these amazing ladies did it and we are all so very proud of them. That is also the magic and the mystery of the marathon its all on the day.
I know some of you will be interested  so Steve Devereaux "Tough battle Thank God finished in one piece" in  3.18.02 and Denis O'Sullivan a fine run in 3.14.22. A big big thanks to Don Ryan and Anna Doris for keeping me posted on Boston during the race as I was in Boherbue and internet reception is poor down there. 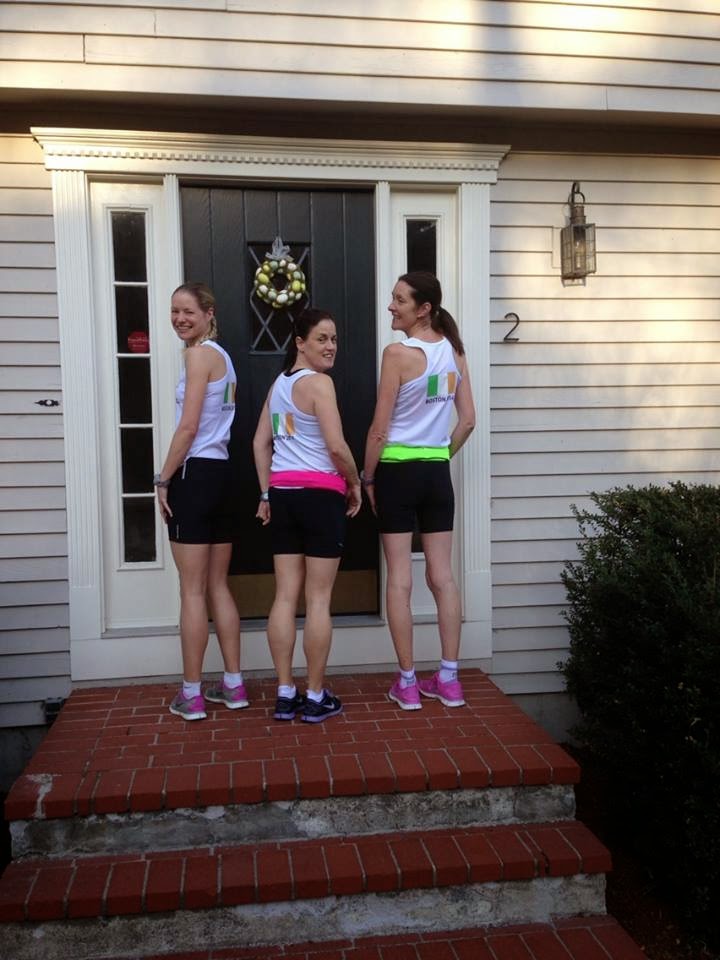 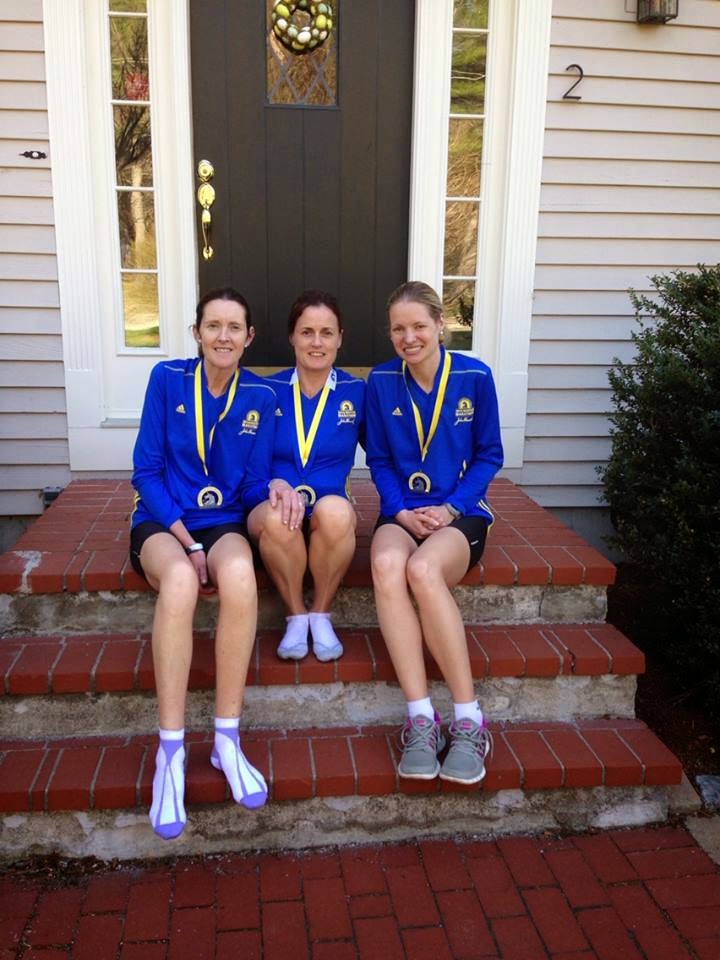 "Free The Boston Three"
Ladies the job is" done n dusted" ye are now free to "shop till ye drop"
NY wont know what hit it when the Midleton AC girls go to town. 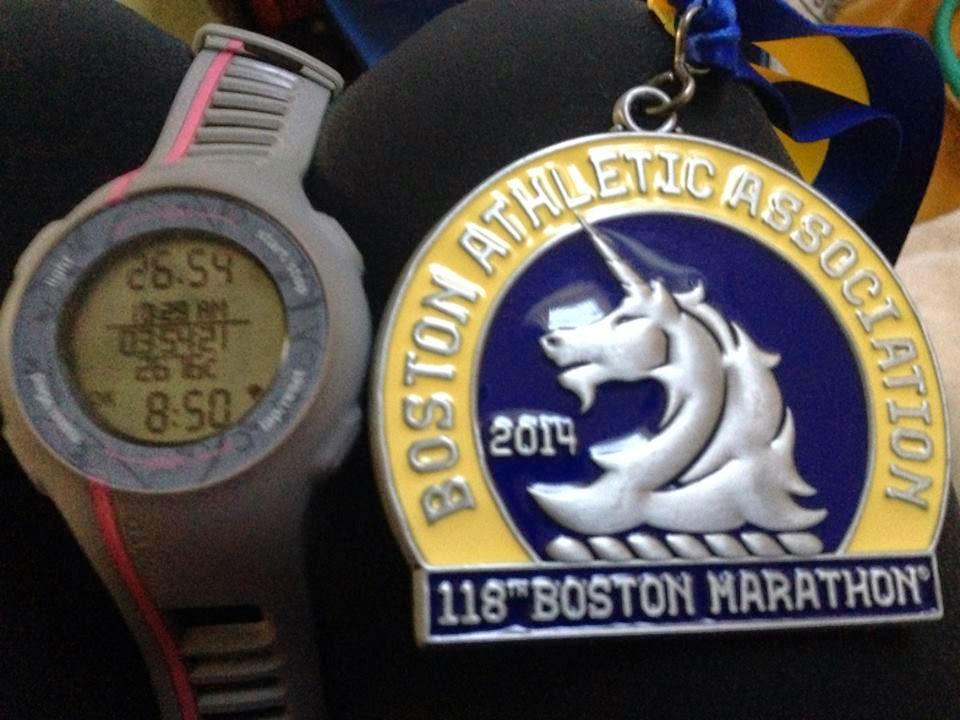 Well lads Boston I did conquer. All went well until mile 10 when the IT Band starting to stick. Well mile 13 it locked so decided I'd aim to finish in the 4hrs so walked and jogged the last 13miles and YES I finished in 3.54. Very happy  Margaret McCarthy Jones

Great to see such a fine crowd there today and the numbers increasing again  for this very special race which saw James McCarthy winning closely follow by Michael Harty who broke the magic 20 mins for the first time.
We were represented by three athletes. Brendan Cronin running on his home turf excelled himself with a great run getting a PB and winning 3rd O/35. Joan McCarthy had a fine run on this reasonable but tough course and came home 2nd O/55. Danny McCarthy also ran there today. Here's hoping a regular for this race Tom Cody will be back running soon.
Macroom Park Run

Saturday saw a Park Run held again in Macroom where we had two members return excellent times John Dunphy continues his flying form finishing in 19.28 and Fionan O'hAodain continues his improvement finishing in 23.49 showing the speed work he did on the track all winter is starting to pay off. 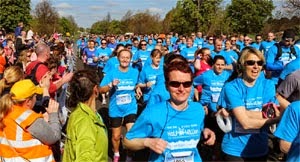 Vincent Connolly completed this race Sat morning. Due to start at 10 o clock it didn't get going till 10.30 which normally would be fine but as per Vince the day was extremely hot nearly 20 degrees which made running very hard. Vincent did 2.04 which is great time especially considering its his first long one in a while and it was so hot. Well done Vince.

The Half Million Half Marathon For Laura Lynn was held today in the Phoenix Park in Dublin and attracted a field of over 1400 runners. One of the runners...a 39 year old man with 3 children...however collapsed after suffering a cardiac arrest after finishing the race. Two Dublin Fire Brigade paramedics (one retired...Gerry Hilliard, one off-duty) who were also taking part in the race came to the man’s aid, and administered CPR. Members of the St. John’s Ambulance arrived and also provided assistance. The man’s pulse returned after he was treated with a defibrillator, and he was then taken to hospital.

A witness said..."Seen the man collapse after just finishing before him and the runner who tended to him definitely saved his life, the poor guy was going grey and Gerry (?) started CPR immediately and got him back, scarily close to a tragedy but well done to all who helped save him! "

From Running In Cork Blog.


He is currently being treated at St James’s Hospital, and is said to be making a good recovery this evening

As always good luck to everyone running over the weekend and please send in your reports. As this is a long weekend we have lots of events to report on. 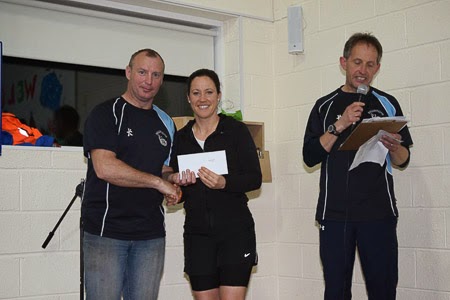 Good Friday morning at 10am sees the start of the weekend racing with Vincent Connolly doing a half marathon in the Phoenix Park. This is Vincent's first long one since getting his hip done last year and I know that everyone wishes him well. Many will have started their running with Vince in the Beginners Section and I am sure that they especially will wish him well.

We have three ladies running in Boston on Monday and likewise I know that everyone wishes them well. They Helen Gilroy, Margaret Jones and Sheila Buckley are in Shannon Airport as I write and we also wish them a safe journey there and back. The girls have prepared really well for this race and are an example to all of dedication and hard work which will pay off on Monday.
On a historical note the last Midleton AC runner we had in Boston in the mid 90s was the great Joe Hourigan and he christened a local hill "Heartbreak Hill" in memory of the occasion as Boston is noted for its hills. Our own race the Midleton 5 (May 1st) is now names the "Joe Hourigan Memorial Five Mile Road Race" in honour and in memory of this always smiling running legend.
Also its forty year since an Irish man Dick Hooper won Boston so the ladies are stepping out on another historic occasion.
Stephen Deveraux Youghal AC who many of you will know from TRInRun shop in Midleton is also running Boston and we wish him the very best also. Steve will be well familiar with Boston having lived there for several years in what he describes himself as "his non running days" Steve is one of the most popular guys on the circuit and he and Rickie have done wonders for local running in recent years. As the yanks say "Way2Go Steve"

This race takes place on Easter Monday and consists of a race from Boherbue to Kiskeam over 4 miles. Entry is in Boherbue where you get a bus back to Kiskeam where the race starts. It has always been a popular race with Midleton athletes and is a nice 4 mile well capable of producing PBs.

This takes place next Thur evening Ladies 7.30 2Km and Men at 8PM ( see previous post) we need as many as possible to run this race.


Posted by Midleton Athletic Club at 10:30