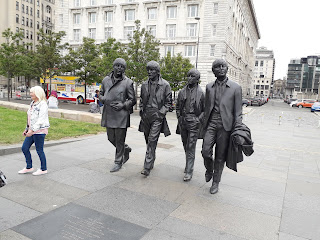 The wet, windy weather didn’t dampen the spirits as myself and several workmates made our way to the start line of the Liverpool Rock’n’Roll Half Marathon last Sunday morning.

I was feeling a little bit apprehensive, this was only my second attempt at running a half marathon, the first one almost two years ago having been a bit of a disaster. All I really wanted was to be able to run the entire course and not walk any part of it.

As starting time approached the rain eased off and soon we were under way. I thought the route was fantastic, particularly as I’ve been a Beatles fan since I was about old enough to hear.


Starting in Liverpool’s rejuvenated docklands area, past the Beatles statue and around the city streets with it’s wonderful mix of modern and older architecture, like the sleek Museum of Liverpool and the magnificent Royal Liver building. Then up Mathew Street, where we passed the world famous Cavern Club, and around the corner by the Hard Days Night hotel. By the time we were leaving the city centre and heading out to the suburbs we already had about four miles done. Shortly after five miles we entered the enormous Sefton Park, then exited it after a couple of miles to run up and down the iconic Penny Lane.


At around nine and a half miles we turned onto a riverside walkway, which on a nice morning would be a lovely spot for a leisurely jog. However, although the rain had long since stopped, there was a strong headwind, to which the broad River Mersey left us totally exposed. That last three and a half miles felt interminable. What got me through it was the fantastic support along the way, and the last several months of Saturday morning long runs with my Midleton AC clubmates, and I’m happy to say I managed to finish without having to walk any part of it.

Overall, it was a great experience. The race was well organised, there were armies of volunteers and stewards to keep everything going smoothly. The atmosphere was brilliant, the people of Liverpool came out in their droves to support us all along the route and there were bands playing live music at approximately every mile - including some old Beatles classics.
Posted by Midleton Athletic Club at 23:00