On a beautiful May summer's morning almost 13,000 participants ran (and walked) through the streets and byways of Limerick city. The sun shone kindly and the beeeze was very light, making for excellent running conditions. The Mayor of the city and the Bishop shared their words of inspiration at the start of the half marathon. Midleton AC was represented by Mags Jones, Mary B Walsh and Mark Walsh.  Mary did the 10k, while Mags and Mark ran the half. The half marathon route began close to the city centre and skirted the edge of the city for the first half of the race, before tracking back through the centre and heading out to the famed Gaelic Grounds (home of the All Ireland Hurling Champions). Turning back again,  we headed for home in the Ennis Road, over Sarsfield Bridge and onto O'Connell Street for a 200 metre dash to the finish. There was fantastic support throughout,  some great music (including a local choir at the finish),  not to mention the goodies and t-shirts. A most enjoyable day. 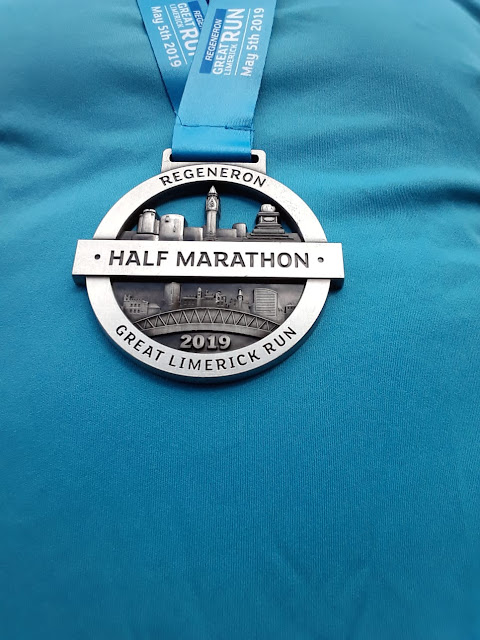 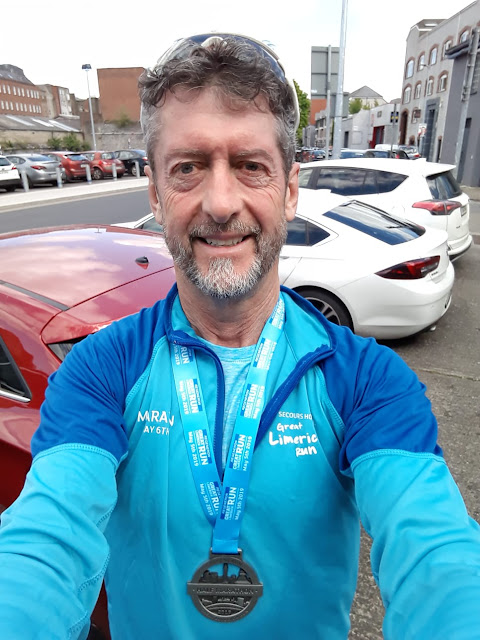 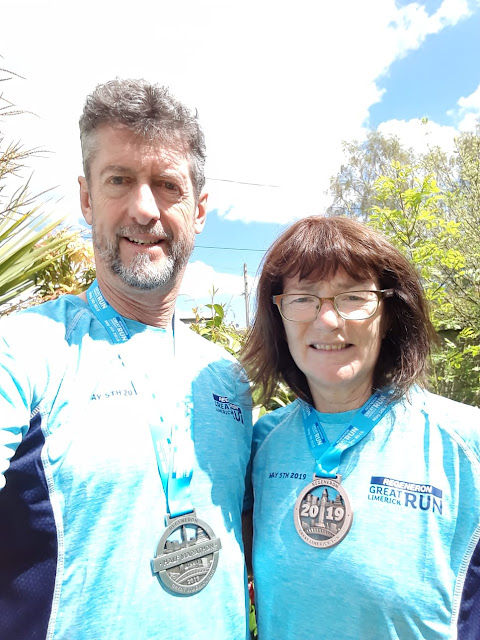 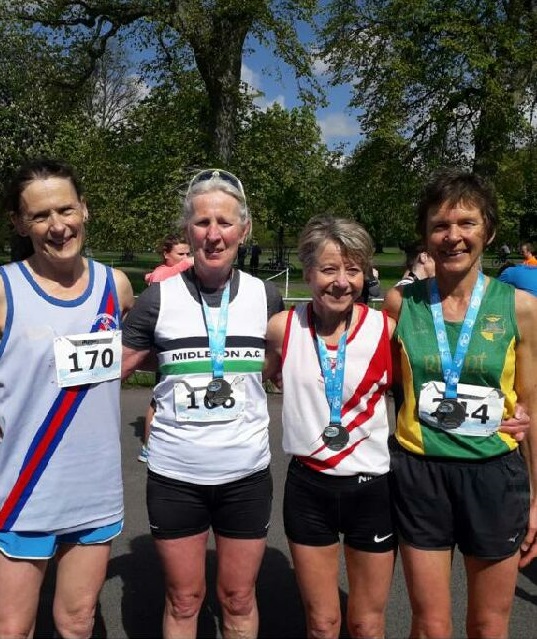 
Club member Joan Hough ran here today and finished 2nd O/60 in 22.03. This is a great achievement and a great result. Well done Joan on another National Medal to your vast collection. 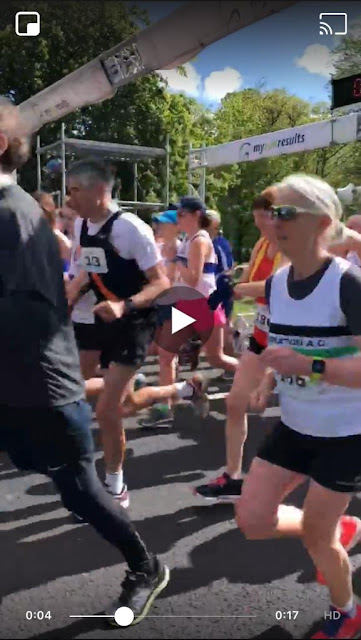 Super running on Saturday morning from Vicki Spiteri in this 5 km where she smashed the twenty minute barrier with 19.44 in her first 5Km race post babies.
Well done Vicki following on the success of her husband Paul who was the first Midleton AC athlete home in our 5 mile on Thursday evening.

Well done to Neilus Aherne who clocked 31.52 and won 1st O/60 in Portlaw on Friday evening and to John Cashman who also did brilliant with 32.57. Great running guys.

The next race on  the BHAA calendar is the Pfizer 6 mile on next Wednesday May 8th at 8pm. Registration is open from 6.30pm in Ringaskiddy at the Raffeen Creek Golf Club. Race costs €5 for registered runners, €10 for non-registered runners.

Talk to our coach Edmond O'Sullivan if you want to register with BHAA. 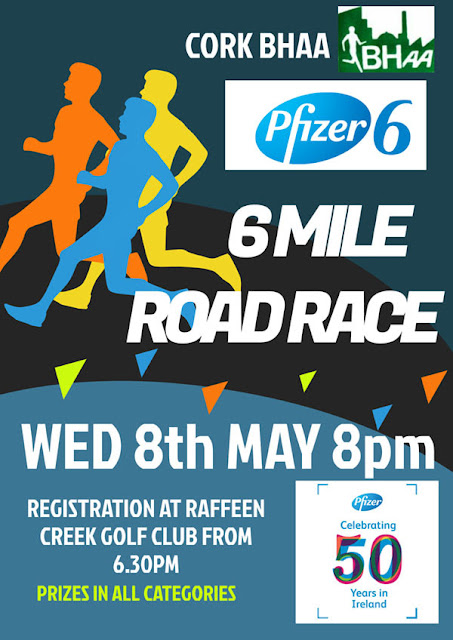 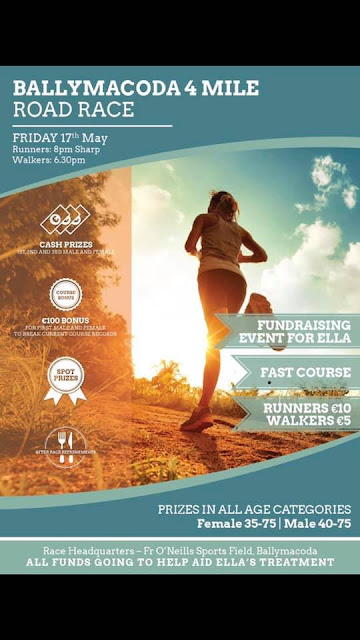 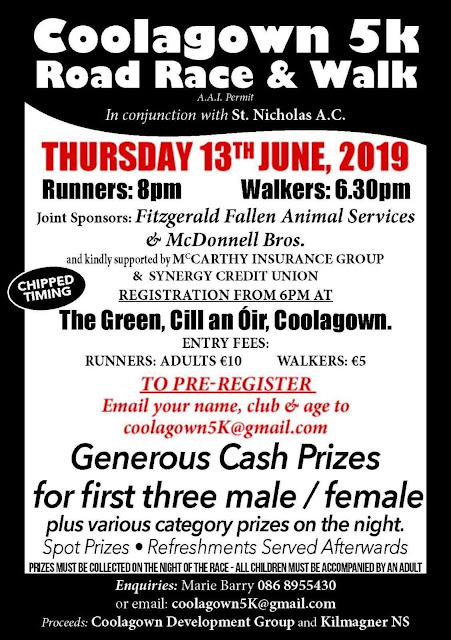 Best of luck to all running this weekend as always please keep us informed of your adventures. 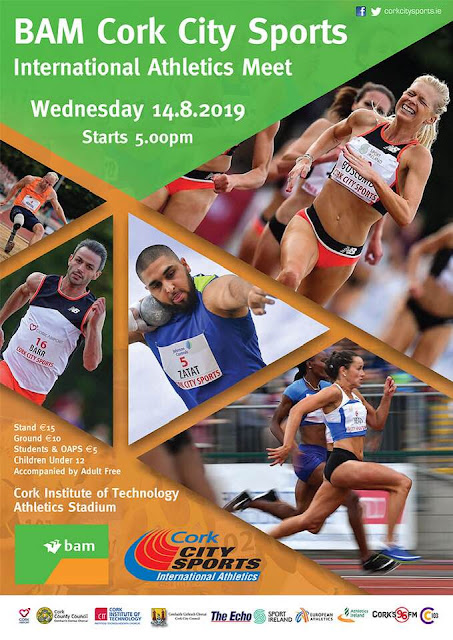 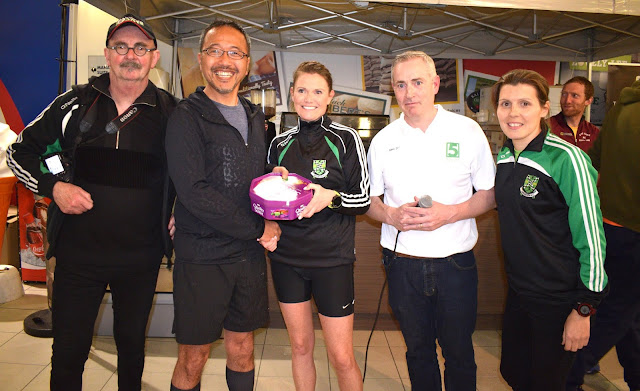 Keitaro Ado from Osaka in Japan has been a familiar figure on the Cork running scene for the past three-and-a-half years. Sadly, however, he has to say goodbye as he returns to his native land this coming week.A participant in events of all distances, he was also a regular at the Ballincollig parkrun every Saturday morning where he had a PB of 21:34. With a beaming smile for all he encountered on his travels, he will be missed by those who got to know him.At the Midleton race on Thursday night, Keitaro was made a presentation and best wishes were extended to him with the hope that he might return in the future to participate in some of the many races that he enriched by his presence.

First and foremost, I want to extend my gratitude to all club members who participated in making the Midleton 5 Mile Race a huge success.

Without club volunteer's the race could not run smoothly.


It is very hard to thank everyone individually, but a few people need to be mentioned as they were the driving force in the background.

Club PRO and Club Registrar Máire Walsh and Danny McCarthy were instrumental in delivering all the messages online to promote the race endlessly.


Race Registration was co-ordinated by Gillian Bransfield and the mighty team to ensure the race entrants had a smooth transition from registration to start line.


Chief Race Marshall Mick Murphy did a fantastic job in ensuring all runners started and finished the race safely.


Catering Leads Bernie Twomey & Deirdre Ahern and all the helpers ensured all hungry runners were fed and got a warm cup of tea & coffee and donuts.


Pacer Lead - Mark Walsh delivered on ensuring all pacers were looked after from start to finish.


Race HQ - Helen Gilroy was the point of contact for all in the venue and did a great job is setup of the venue.

John Cashman did a super job on the mic at the start and the finish encouraging everyone all the way to the end.


Take a bow each one of you as you are all a credit to your club.This would not be possible without all the sponsors and I would like to thank all those who secured sponsorship along the way.

We are a club of about 170 people and last night a combined total of nearly 70 participated in the running of the race which is quite remarkable well done everyone.
We also had a lot of external help from people last night, a mention to all the ladies in registration who came up from Cloyne and other areas.Denis Kelleher former member leading out the runners, Thank you.
John Carey former member assisting John Cashman with all the sound equipment.


Market Green proved to be fantastic venue again this year and I would like to thank Tom Kelly and Gavin Power in all their help before and after the race.


Tesco were very kind in allowing the use of the canteen facilities, Thank you.Last word goes out to former Race Director's Eugene McCarthy & Mark Walsh for all their assistance, I really appreciate.Thanks again to all as we now look forward to Midleton 5 Mile 2020. 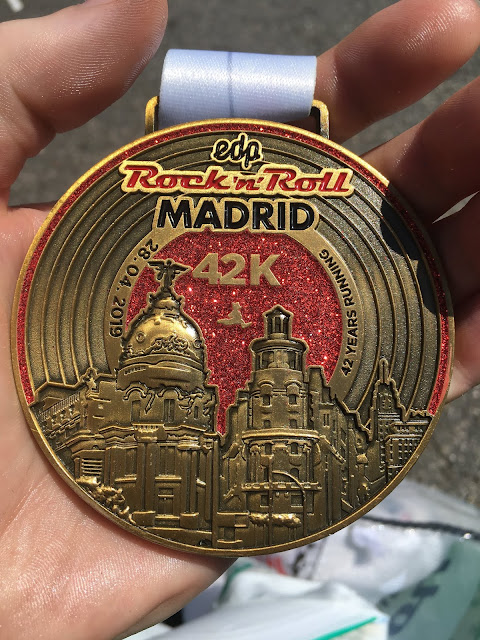 
The real challenge here was getting to the start line of a Marathon at all.
I agreed late last year to run a Spring Marathon with 2 friends.  We initially chose Rome but it quickly became apparent that there was an administrative issue with the event being held & after several weeks of uncertainty & legally worded announcements from the Organisers we had to abandon it & decided upon the Madrid Marathon on Sunday 28th April.

After flights & accommodation were booked the next setback occurred as the President of Spain announced that a General Election was to be held the day of the Marathon.  This led to the Organisers debating for a few days about whether to change the date or start time.  They decided to bring it forward to Saturday 27th April.  We therefore had to change our flights & accommodation to make it.

But at last the day arrived.  It was warm.  Very warm.

The Marathon & Full Marathon started together which meant that the early water stations were chaotic.  This was offset by passing the historic Santiago Bernabeu Stadium after 2 Miles followed by the unusual Puerta De Europa Towers. 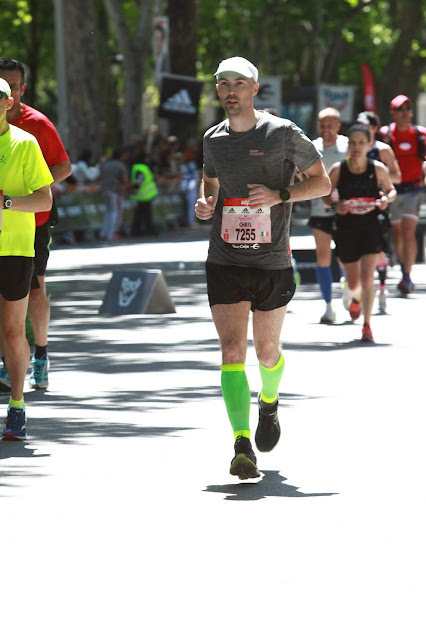 The Half Marathon Runners split from the route after 10 Miles by which time the temperature had hit 27C.  The route was very well supported throughout by locals especially at Sol Square with shouts of 'Vamos' (Come On) keeping the runners motivated.  There were numerous bands performing & adding to a great atmosphere in the City before we finished by the Museo De Prado. 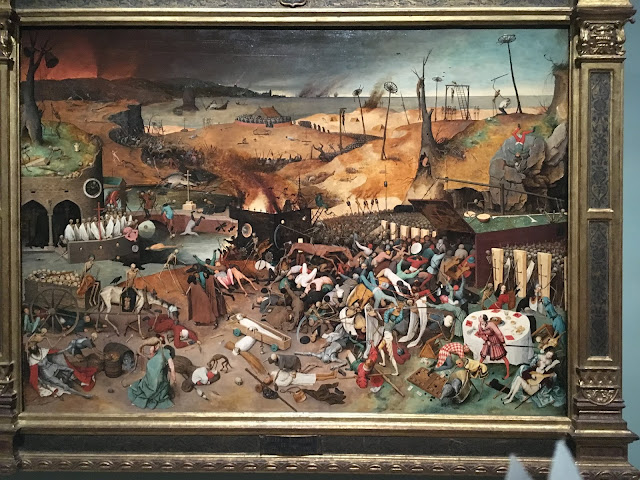 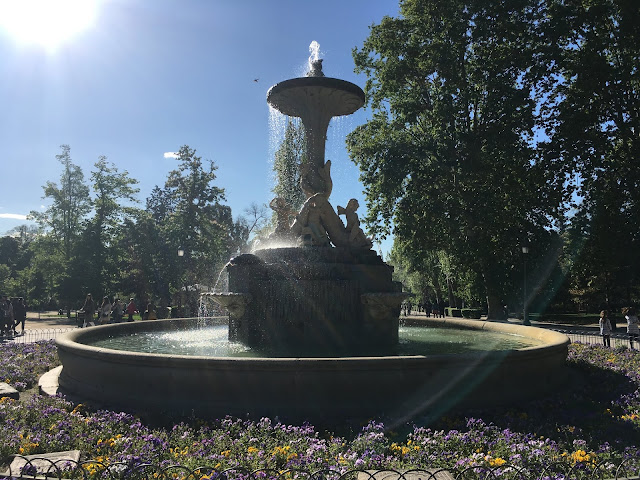 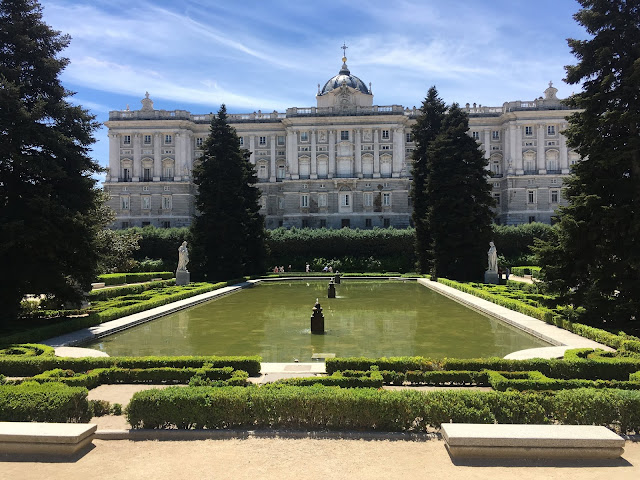 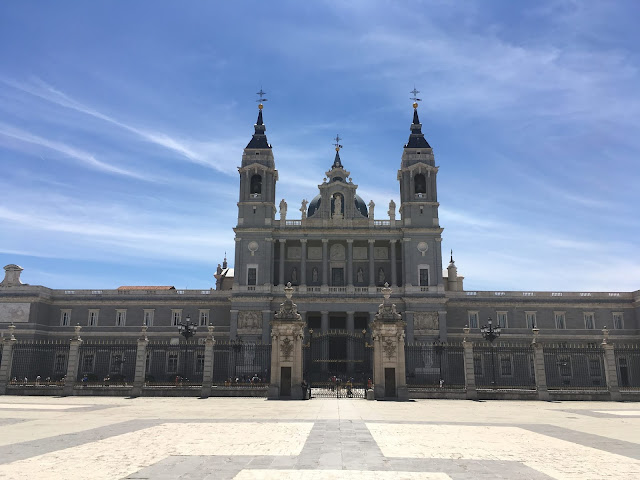 Madrid is a fantastic City to visit (attached are a few photos) & the Marathon was a great experience though probably the toughest Marathon Course I have run due to several challenging hills, but as the great Eliud Kipchoge says - "No human is limited".


Posted by Midleton Athletic Club at 09:24